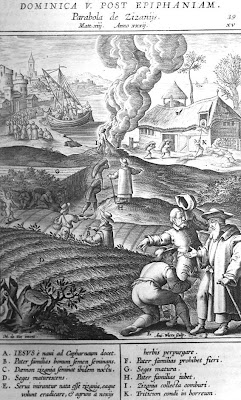 Today is the anticipated Fifth Sunday after the Epiphany. It is of semi-double rite.

In order to minimise the number of Sunday's omitted in the annual cycle this year the Fifth Sunday is anticipated with all the privileges of a Sunday as tomorrow is Septuagesima Sunday. Yesterday at Vespers, although the ferial psalter was used, the collect was from the Sunday and the Vespers were priviliged in concurrence with the double feast of St. Titus. A commemoration of St. Titus and St. Romuald was made.

At Mattins the psalms of Saturday are used but in the first nocturn the first lesson is the Incipit of the First Epistle to Timothy (from the fifth Sunday), the second lesson in the Incipit from the Second Epistle to Timothy (from the Tuesday after the fifth Sunday) and the third lesson the Incipit from the Epistle to Titus (from the Thursday after the fifth Sunday), with the responsories of the Sunday. The lessons in the second nocturn are a Sermon of St. Augustine and in the third nocturn are a homily from St. Augustine on the parable of the sower. At Lauds the psalms of Saturday are sung but the antiphon at the Benedictus and the collect are of the Sunday. At Prime the chapter is Regi saeculorum as used on Sundays and feasts and in the Martyrology the first entry read is Dominica in Septuagesima etc. At the other Little Hours the collect of the Sunday is sung.

At Mass the Gloria is sung, a commemoration of St. Romuald is made. The Creed is sung and the Preface is that of Sunday.

Vespers are of Septuagesima Sunday celebrated in violet vestments. A commemoration of tomorrow's occuring Office of St. John of Matha is made and of St. Romuald. When the cantors chant Benedicamus Dominio two Alleluia's are added and also added the response Deo gratias. Then until Holy Saturday there is no Alleluia in the Roman Office. At Compline and at all Hours until the Triduum after Deus in adjutorium etc. Alleluia is replaced by Laus tibi Domine Rex aeterne gloriae. The English Jesuit Herbert Thurston in his work 'Lent and Holy Week' gives several examples of eccentric symbolic burials of the Alleluia (pp. 29 - 32.)

In the 'liturgical books of 1962' the fifth Sunday is not anticipated and so the liturgy is entirely different. On Friday Vespers were of St. Titus without any commemorations. Today the feast of St. Romuald reduced to a third class feast. At Mattins the lessons of the Saturday after the fourth Sunday are read as first and second lesson. At Mass the Gloria is sung. Vespers are of Septuagesima without any commemorations.