The last green vestments for a while

Today will see the last use of green as a liturgical colour until after the Octave of the Epiphany.

In the last week before Advent the 'Minor Prophets' supply occuring scripture for Mattins with a different Incipit for each day. In some years this can lead to some 'leap-frogging' to get them all read but this year it is relatively simple with Nahum on Monday, Habacuc on Tuesday, Sophonias on Wednesday and Aggeus on Thursday.

Today becomes slightly more interesting because Saturday is the Vigil of St. Andrew the Apostle and thus has proper lessons. So in today's ferial nocturn the first and second lesson are from Zacharias but the third lesson is anticipated from Malachias that was due to be read on Saturday.

The rest of the day is that of a feria, Suffrage of the Saints at Lauds, Dominical preces at Prime. At Mass the Gloria is not sung, the second collect is A cunctis the third chosen by the celebrant or Dean. Benedicamus Domino is sung as the dismissal.

Vespers are ferial with a commemoration of St. Saturninus and the Suffrage of the Saints. The Dominical preces are sung at Compline.
Posted by Rubricarius at 08:01 No comments:

Email ThisBlogThis!Share to TwitterShare to FacebookShare to Pinterest
Labels: Feria 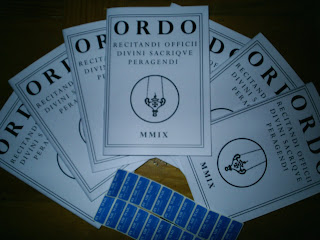 Orders for Ordo 2009 are now going out via AirMail for non-UK customers and 2nd class post for UK ones.

Ordo 2009 got delayed slightly at the printers. Last year an Adobe Acrobat file was used by the printer without any problem. This year the new printer (the former had increased their quotation by a ridiculous amount) had the same format but the dotted lines separating the date and liturgical colours would not print properly. The line was then changed to a solid one but the process had begun and some eighty Ordines were produced which had the defective line. Perhaps they would have become collectors items in a hundred years' time but they ended up in the recycling bin.

The solid line versions arrived on Wednesday and are now going out in batches so please be patient.

Two friends at the weekend commented on how much better the quality of print is this year. The print is much blacker and, consequently, much easier to read. I am delighted with the new printers and trust that you, esteemed customers, will be similarly pleased with your copy(ies) of Ordo 2009.

I am also setting up a PayPal account but have to wait a few days for verification. Please watch this blog.
Posted by Rubricarius at 17:58 No comments:

Email ThisBlogThis!Share to TwitterShare to FacebookShare to Pinterest
Labels: The Ordo

An old friend of mine Dr. Gregory (Graham) Woolfenden, aka Hegoumen Gregory, died on Thursday evening in the USA. Gregory was one of most erudite liturgical scholars I have ever met. Besides his formidable knowledge he was excellent company and a pleasure to have at the dinner table and enormously good value as a guest. I had emailed him on Thursday morning with a promise to 'phone over the weekend but this clearly was not to be.

He died, after a short illness, from cancer of the kidney. He was 62.

May his soul repose in peace. Please pray for him.
Posted by Rubricarius at 15:46 1 comment:

Email ThisBlogThis!Share to TwitterShare to FacebookShare to Pinterest
Labels: Personal

I was somewhat amused the other week when I spent a delightful evening with the Saint Lawrence Press' two other directors. I was told how an SSPX priest, who shall remain nameless, had said that the "SSPX had always used" the 'liturgical books of 1962'. At best he was clearly misinformed and at worst...

Some years ago a friend, who has now departed this life, gave me a copy of a 1981 Newsletter for the District of Great Britain. The inside cover has the calendar for June: 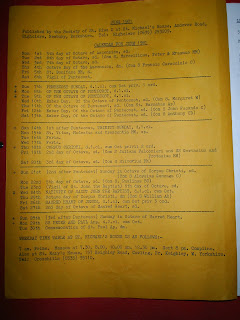 The Octaves of the Ascension, Corpus Christi, Sacred Heart, St. John the Baptist and SS Peter and Paul are all quite clearly being celebrated as was the Pentecost Vigil. The traditional classification of liturgical days is also to be noted. I suspect SS Peter & Paul being reduced to a double of the second class is a 'typo'. What is also notable is the daily celebration of Prime, Sext and Compline at the chapel in Highclere. Where now in 'parish' situations does this take place?

On the rear cover mention is made of three Corpus Christi processions within the Octave (one albeit implicitly). Most interesting of all, to me at least, is the announcement for the events of the Pentecost Vigil at Highclere. The ancient Vigil ceremonies are being observed at 10:00am. Vespers of Pentecost Sunday are being celebrated at 3:00 followed by Mattins and Lauds at 5:00pm. Does the SSPX even celebrate Mattins and Lauds anywhere anymore one must wonder yet alone the Vigil of Pentecost? 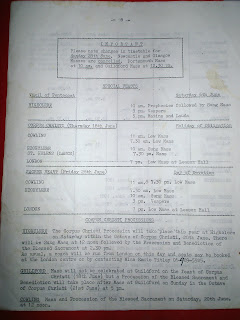 I also used to wonder what was supposedly wrong with the Pentecost Vigil to cause its excision from the later editions of the Roman Missal? Was its time of celebration putatively wrong? The answer came a few years ago when the Latin Mass Society, in a daring mood, used the pre-1962 liturgy for a few months in the late 1990s in Central London. A sung Vigil of Pentecost was arranged which was rather good. After the Mass I saw the celebrant, a rather elderly and very decent priest, shaking with emotion. He said "That's how Holy Week used to be. What they use now isn't really the Old Rite." His honest appraisal answers the question as to why the Pentecost Vigil had to go. Its celebration would remind people too much of the old order.
Posted by Rubricarius at 19:36 3 comments:

Versus populum - A Conciliar practice? 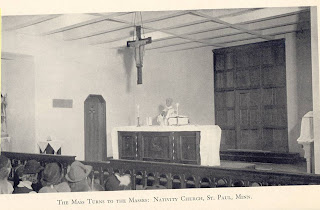 One of the great myths of the contemporary liturgical crisis is that Mass facing the people was a product of the Second Vatican Council.

Sadly both the 1962ists and the more avant garde modernists both identify the Council as the originator of the practice in their revisionist rewriting of liturgical history. In fact the Council documents say nothing about versus populum.

Actually the practice was relatively widespread by the 1950s in parts of the USA and Continental Europe. A picture, it is said is worth a thousand words. So for the benefit of readers here are several. The top picture appears in Gerald Ellard's 'Men at Work at Worhip' that was published in 1940. So that picture was probably from the late 1930s. The picture below is taken from the same author's 1948 work 'The Mass of the Future': 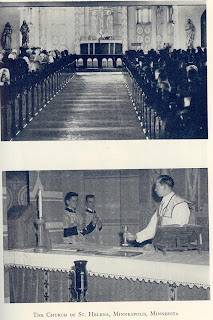 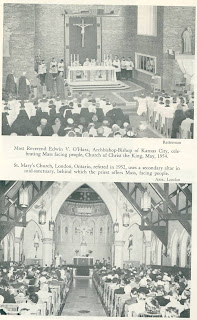 After the Ordo orders have been despatched I will post an article on the subject.
Posted by Rubricarius at 11:39 1 comment:

Octave Day of All Saints

Today is the Octave Day of All Saints and is of greater double rank.

The Office is as on the feast but the psalmody is taken from the Psalter for Saturday. At Mattins the first nocturn lessons are from occuring scripture, the lessons of the second and third nocturns are proper with the ninth lesson being of the Forty Crowned Martyrs.

At Lauds a commemoration is also made of the Four Crowned Martyrs.

At Mass the Gloria is sung and the second collect is of the Four Crowned Martyrs.

Vespers are first Vespers of the following feast of the Dedication of the Lateran Basilica with a commemoration of the Octave Day of All Ssints and the third Sunday of November.

This year the second Sunday of November and its week are omitted.
Posted by Rubricarius at 08:00 No comments:

Within the Octave of All Saints

Today is the fifth day within the Octave of All Saints. The day is of semi-double rank. None of the antiphons are doubled.

The Office is a combination of that of the feast and the occuring feria. At Mattins the invitatory and hymn are from the feast but the psalmody is from the feria. The first nocturn lessons are those for Wednesday in the first week of November. In the second nocturn lessons are proper to the day within the Octave as are those of the third nocturn. At Lauds the psalmody is ferial but from the chapter the Office is as on the feast. A similar pattern is followed for the 'Little' Hours.

At Mass, as on the feast, the Gloria is sung, the second collect is of the Holy Ghost, Deus, qui corda and the third collect is for the Church or for the pope. The Creed is always sung during Octaves (except simple ones).

Vespers are of the Octave.

According to the 'liturgical books of 1962' the glories of All Saints has been forgotten and the day is a 'green' feria with but one nocturn at mattins. The Maas is of the preceding Sunday (without Gloria and Creed) and has, despite the omission of the Gloria, Ite, missa est as the dismissal.
Posted by Rubricarius at 08:01 No comments: