Sunday within the Octave of the Sacred Heart 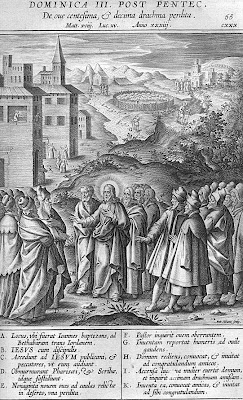 The feast of the Sacred Heart had been extended to the Universal Kalendar by Pius IX in 1856 as a greater double. Leo XIII raised it to a double of the first class in 1889. On May 8th 1928 Piux XI granted a privileged octave of the third order to the feast and a new Office and Mass were composed and issued the following year along with a proper preface. Pius XII stripped the octave away in 1956.

At Mattins all is sung as on the feast except the lessons. In the first nocturn occuring scripture is from the First Book of Kings. In the second nocturn the lessons are from Pius XI's Encyclical honouring the feast and in the third nocturn a homily of St. Gregory on the Gospel. At Lauds the antiphons and psalms are as on the feast; the chapter, antiphon on the Benedictus and collect of the Sunday. A commemoration is sung of St. Aloysius and of the Octave.

At Prime the psalms are festal. In the short responsory the versicle is Qui Corde fundis gratiam.

Mass is sung after Terce. The Gloria is sung, the second collect is for St. Aloysius, the thrid for the Octave, the Creed is sung and the preface is that of the Octave.

Vespers are as on the feast with the chapter, antiphon on the Magnificat and collect of the Sunday. A commemoration is sung of the following feast of St. Paulinus, of St. Aloysius and the Octave.

According to the books of the 'Extraordinary Form' of the New Rite the Octave has been stripped away. The Sunday is a 'green' one with no commemorations at Vespers. Mattins is stripped down to one nocturn of three lessons. At Lauds there are no commemorations - both the Octave and St. Aloysius are ignored. At the Hours the Dominical tone is used for the hymns, the special Doxology has of course gone. At Mass there is but one collect and the preface of the Sunday.
Posted by Rubricarius at 07:01

What is the position on the Dialogue Mass? Did Pius XI approve it?