Peter Anson and versus populum

I was both amused and saddened last week to read comments of suprise in response to a poem that I understand first appeared in the April 1965 edition of the Homiletic and Pastoral Review. The title of the poem is 'The Updated Church' and the first two stanzas run thus:

Latin’s gone
Peace is too
Singin’ and shoutin’
From every pew.

Altar’s turned round
Priest is too
Commentator’s yellin’
“Page Twenty-two!”

A brief search of the Web will yield thousands of words quite incorrectly blaming versus populum celebration on Paul VI's Novus Ordo Missae and the Second Vatican Council. In the current climate of revisionism (some might decide that 'revisionism' is rather too much of a euphemism and simply call it lying) of course it is de rigeur to equate the 1970-2002 missal with versus populum and quietly ignore the fact that celebration versus populum was a popular post Second World War fashion, its modern origins being several decades earlier.

Perusing my copy of Peter Anson's 'Fashions in Church Furnishings' (1960) I came across his writings and a drawing about VP. 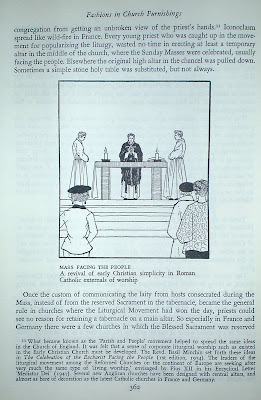 Anson had great skill with the pen and a picture does, as has been said, paint a thousand words. I do like the way he has captured the ladies' hats and the flow of the servers' albs. I was particularly struck by this passage:

"Every young priest who was caught up in the movement popularizing the liturgy, wasted no time in erecting at least a temporary altar in the middle of the church, where the Sunday Masses were celebrated, usually facing the people. Elsewhere the original high altar in the chancel was pulled down. Sometimes a simple stone holy table was subsituted, but not always."

But of course everything was hunky-dory, tickety-boo and 'organic' development until the wicked Council and Paul VI?
Posted by Rubricarius at 11:16

....quietly ignore the fact that celebration versus populum was a popular post Second World War fashion, its modern origins being several decades earlier....
--------------
This is strange. It was supposed to be popular but most of us did not witness it!

It depends where you were. In England VP was certainly rare. Anson mentions one church with the titular English Martyrs and of course there was Pershore with Mgr. Crichton pushing every novelty with great gusto.

I had heard of ''versus populum'' (''versus turbam'' I'd call it) celebrations going as far back as 1940. I wonder if this was a contributing factor in the post-Vatican II frenzy for literal understanding of the Rites and popular dialogue Masses?

I suspect the practice (and I do like the term versus turbam!) is deeply linked to cultural factors hence the popularity in continental Europe and certainly with the desire that grew increasingly strong during the twentieth century for rational understanding.

P.s. Talking of poems, are there any old anglicans who have a poem beginning with the glorious lines:

A snipe at South Bank Religion in, possibly, the left wing and High journal Prism ?

These are very complex liturgical questions, but I expect that versus turbam celebrations will have to one day be overcome in the New Rite - whether people like the priest having his back to them or not. Liturgy is not afterall about them. I can't understand why it is so championed by people; it is liturgically, as well as theologically, ludicrous. It has no precedance in the history of the Church. Luther introduced it as another ingenious way to dismantle the Liturgy, and what does that tell you about the absurd practice!

I agree. Another aspect is the intrinsic clericalism (in a bad sense) of versus turbam. Why the need to be opposite the people behind a 'barrier'?

Another factor, at least subconsciously, I am sure was the perception that the pope had the 'privilege' of celebrating VT. We know the origin of this was the orientation of the papal basilicas but this seems to have been lost in Rome by the late Middle Ages. I have an illustration of Pius VI celebrating in St. Stephen's, Vienna in 1782. The high altar has been boarded up and a throne placed on the footpace; mid-sanctuary there is a forward facing altar. One suspects everyone had forgotten the reason for the apparent VT celebration.

I suspect an element of if the pope can do it why can't we was in the mind of many clergy if it were regarded as a 'privilege'.

A "basilican" or freestanding altar, for celebration versus populum, was designed by Lutyens for Liverpool Cathedral. The drawings, which postdate Lutyens' audience with Pius XI in 1933, can be seen in ASG Butler's 'The architecture of Sir Edwin Lutyens' (Volume III, Country Life, London, 1950).

Lutyens had received written permission from Mgr Barton Brown, a liturgical expert who had been charged by the archbishop of Liverpool to advise on the layout of the sanctuary, to design a freestanding high altar (for celebration versus populum). The design unveiled in 1934 was very much influenced by the altars in the papal basilicas which Lutyens had seen the previous year.

Thank you for that information, which I didn't know.

I understand a 'basilican' altar was originally discussed for the church of the Birmingham Oratory in the spirit of Ultramontanism.

Hey. Very nice site!! Man .. Beautiful .. Superb .. I will bookmark your site and take the feeds additionally...I'm glad to locate a lot of useful info here in the post. Thank you for sharing.