Fourth Day within the Octave of the Assumption 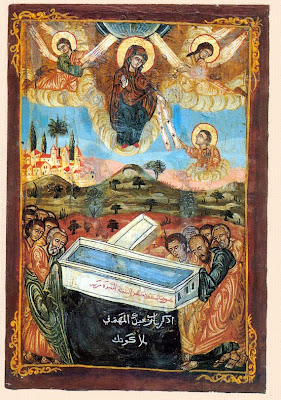 The Office is as on the Feast itself, but the antiphons and psalms come from the Psalter for Tuesday. All hymns of Iambic metre are sung to the Marian Doxology and tone.

At Mattins in the first nocturn the lessons are taken as on the feast from the Canticle of Canticles with its exquisite poetry and symbolic language. The responsories of the feast are used. A section of the third lesson illustrates the beauty of the texts:

Thy lips, my spouse, are as a dropping honey comb, honey and milk are under thy tongue; and the smell of thy garments, as the smell of frankincense. My sister, my spouse, is like a garden enclosed, a garden enclosed, a fountain sealed up. Thy plants are a paradise of pomegranates with the fruits of the orchard. Cypress with spikenard. (Translation by the nuns of Stanbrook Abbey)

In the second nocturn the lessons are taken from the Second Discourse of St. John Damascene on the Dormition of the Mother of God and are again beautiful and rich in their didactic content.

An ancient tradition has been handed down to us, that, at the time of the glorious falling-asleep of the blessed Virgin, all the Apostles, who were wandering throughout the world preaching salvation to the Gentiles, were caught up aloft in the twinkling of an eye, and met together in Jerusalem. And when they were all there, a vision of Angels appeared to them, and the chant of the heavenly powers was heard; and so with divine glory she gave up her soul into the hands of God. But her body, which bore God in an effable manner, being lifted up amid the hymns of Angels and Apostles was laid in a tomb in Gethsemane. There for three whole days the angelic song was heard. (Lesson IV)

But after three days, the chant of the Angels ceased, and the Apostles who were present (for Thomas, the only one who had been absent, came after the third day, and wished to adore the body which had borne God) opened the tomb; but they could by no means find her sacred body in any part of it. But when they only found those garments in which she had been buried, and were filled with indescribable fragrance which emanated from them, they closed the tomb. Amazed at this wonderful mystery they could only think that he, who had been pleased to take flesh from the Virgin Mary, to be made man, and to be born though he was God the Word, and the Lord of glory, he who had preserved her virginity without stain after childbirth, should also have been pleased to honour her pure body after her death, keeping it incorrupt, and translating it into Heaven before the general resurrection. (Lesson V)

In the sixth lesson St. John lists those present who had seen the body of the Virgin, including in addition to the Apostles, Timothy bishop of Ephesus (recipient of the Pauline Epistles), Dionysisus the Areopagite and Hierotheus.

In the third nocturn the lessons are from the 27th Sermon of St. Augustine on the Words of the Lord. The ninth lesson is for St. Agapitus the Martyr.

At Lauds a commemoration of St. Agapitus is sung. At Prime Qui natus es is sung in the short responsory, the lectio brevis is In plateis.

Mass is sung after Sext. The Conventual Mass is that of the 'resumed' Mass of Pentecost XI which could not be celebrated due to the occurrence of St. Joachim's feast on Sunday. According to Additiones I, #6 this Mass is of simple rite without Gloria and without Creed. The second collect is of the Octave and the third collect is for St. Agapitus. As the Gloria is not sung Benedicamus Domino is sung as the dismissal and the colour of the vestments is green.

However, 'private' Masses may be of the Octave. The defintion of 'private' is actually quite complicated and suffice it to say, for the moment, that a High Mass may be a private Mass. In the Mass of Octave, glorious Gaudeamus, the Gloria is sung, the second collect is of the resumed Sunday, the third collect is for St. Agapitus, the Credo is sung, the preface is of the BVM. As the Sunday's Gospel was read as a proper last Gospel on the feast of St. Joachim it is not read as last Gospel today.

Vespers are of the following feast of St. John Eudes with a commemoration of the Octave.

In the rocky horror service books of course the Octave has been done away with. No Marian Doxology at the hymns, no Qui natus es etc. There remains a 'fourth class' feria wherein St. Agapitus gets a commemoration at Lauds and Low Mass. Somewhat ironically the same Mass, Pentecost XI is said but with Ite, missa est even though the Gloria has not been sung. Vespers is ferial.

The Icon is from the Coptic Church of St Menas in Cairo, taken from an interesting site featuring a range of Coptic Icons and texts. The Icon shows the Apostles and Fathers around the, now, empty tomb of the BVM.
Posted by Rubricarius at 07:13

Email ThisBlogThis!Share to TwitterShare to FacebookShare to Pinterest
Labels: Semi-Double, Within the Octave

Of all the many reasons to be grateful for this day within the Octave, one of the more gratifying to me is the serene inclusion of St. John Damascene's witness to the authenticity of the texts of St. Dionysius; the attempts to impugn their genuineness--beginning in the 16th century--always seemed to me, at least, to be one of the first "spectres" of what would come to be called Modernism.

St Francis de Sales and Dom Gueranger, both writing after Erasmus of course, both nonchalantly cite Saint Denis and his testimony that the world was darkened at the Crucifixion. Is there any argument one could give in favour of the traditional, pre-critical attribution?

Dear Francis,
A good introduction to the question was written by the Rev. John Parker (a follower of Dr. Pusey) in 1899; it is available on the internet at this URL:
http://www.ccel.org/p/pearse/morefathers/areopagite_12_introduction.htm

Could you kindly re-post the link to which you refer in your 08:50 post - it doesn't open.

I for one am itching to read what John Parker said.

As a general principle I think we cannot read enough of the Early Fathers. If the early texts are true, and I believe they are, then men actually saw the Blessed Virgin in her tomb. Did these people lie? I don't think so. I am waiting confirmation of a couple of points about liturgical praxis in the Byzantine rite and the Coptic Church to add to all this.

I'm afraid I carelessly called Dr. Pearson "Parker." At any rate, I've copied the URL anew, and hopefully this time it will connect. (I see that the previous attempt cut off the letters at the end.)

(I'm not sure if the Comment Box software will format the URL so that it "fits" the space. So, here it is typed out instead of copied:
http://www.ccel.org/p/pearse/
morefathers/areopagite_12_introduction.htm)

If that should fail, then I suggest using Google and entering "John Pearson Areopagite." The entry appears under the heading: "Dionysius the Areopagite, Works (1899), vol. 2, p. i-xx, introduction."

I look forward to reading your information about the Byzantine rite and the Copts.

I read recently somewhere (perhaps in 'How Christ Said the First Mass') that the altar to the unknown god in Athens had been erected by St Denis when he witnessed the darkness which covered the earth at the death of Our Lord.

There is also this: http://www.tertullian.org/fathers/areopagite_11_objections.htm