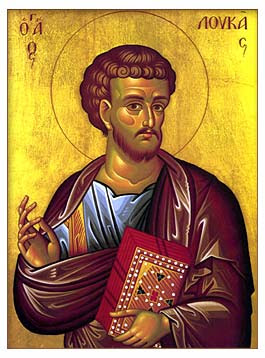 Today is the feast of St. Luke the Evangelist. The feast is a double of the second class and its liturgical colour red. The twentieth Sunday after Pentecost is commemorated at both Vespers, Lauds and Mass. St. Luke was probably born in Antioch and in St. Paul's writings is described as a physician. He was a companion of St. Paul and the author of a Gospel that addressed itself to the non-Jewish world. His feast became a double of the second class with Pius V's codification of the liturgical books.

The feast began with the celebration of first Vespers yesterday. The antiphons and psalms sung were those from the Common of Apostles. Commemorations were sung of the preceding Office of St. Margaret Mary and of the Sunday (the third of October).

At Mattins the invitatory, antiphons and pslams are taken from the Common of Apostles but the lessons in the first nocturn are proper for Evangelists from the writings of the prophet Ezechiel. In the second nocturn the lessons are proper to the feast of St. Luke and from St. Jerome on Ecclesial Writers. In the third nocturn the lessons are from the Common of Evangelists with a homily by St. Gregory. The Gospel fragment is from the tenth chapter of St. Luke. The ninth lesson is of the occuring Sunday with the Gospel fragment from St. John and a further homily by St. Gregory. Only the first Sunday lesson from its third nocturn needs to be read but the better practice is to combine all three as one ninth lesson.

At Lauds a commemoration of the Sunday is sung. At Prime the Office is festal (Pss. 53, 118i, 118ii) and the short lesson Ibant Apostoli.

Mass is sung after Terce. The Gloria is sung, the second collect is of the Sunday and a third collect sung, Deus, qui nos homines..., for the propogation of the faith. This third collect is sung as the penultimate Sunday of October is Mission Sunday. At the request of the Superior Council of the Pontifical Work for the Propogation of the Faith the Sacred Congregation of Rites directed in 1926 that the prayer, from the Votive Mass Pro Propagatione Fidei, should be added to all Masses today as an oratio imperata pro re gravi (a prayer ordered by the Ordinary or other competent authority for a grave need). The Creed is sung, the preface is that of the Apostles and the last Gospel is that of the commemorated Sunday Erat quidam regulus.

Vespers are of the feast, again the antiphons and psalms are from the Common of Apostles. A commemomoration of the Sunday is sung.

In the 'liturgical books of 1962' the 'green' Sunday is celebrated. The third Sunday of October and its week are omitted and the fourth Sunday of October celebrated. Mattins is cut down to one nocturn of three lessons. St. Luke gets a commemoration at Lauds and Low Mass only. The prayer for the propogation of the faith is added to the collect of the Sunday under one conclusion. Vespers are of the Sunday without any commemorations.
Posted by Rubricarius at 07:01

Something I could never figure out...
Why doesn't St.Luke get a vigil?
I noticed that there is no mention of it at mass nor in the office of the 17th(St. Margraret Mary). Can you shed some light on this? I know most of the apostles and evangelists get vigils...

Good question and I don't have an answer.

I have never seen any reference to a Vigil for St. Luke but neither is there one for St. Mark.

The argument that Vigils were excluded from Paschaltide is not completely watertight as some sacramentaries had a Vigil for SS Philip and James.

Thanks for the response...
Sts. Philip and James on May 1st is another as well and St. Mark...you're right. The 'Additiones et Variationes, has nothing about it outside of general rubrics concerning vigils. I just always thought it curious why some and not others...
Thanks again and keep up the good work on the blog and the ordo and btw, I just sent in my "ordo order" for 2010.

Thank you so much for posting this. I was doing research on St. Luke for school and found out a lot from this post. Thanks!

You are welcome. Good luck with the school project!

Liturgical days have different rankings. In the Old Roman rite days ranked from Double of the First Class, Double of the Second Class, Greater Double, Double, Semi-double, and Simple. The different ranks had different structure to the Divine Office and, basically, higher ranking days outranked lower ones when a moveable feast fell on the same day as a fixed feast.

Each day also had a colour that was proper to it. In the Roman rite the colours were limited to red, white, violet, green and black. Black was used in services for the dead and on Good Friday, violet in penitential seasons such as Lent, red on the feasts of martyrs and at Pentecost, white for Paschaltide, Epiphany, Christmas, feasts of the LORD, the BVM and for the feasts of confessors and holy women. Green was used for time after Epiphany and the time after Trinity Sunday and Advent.

Rubicarius,
I wonder if you could enlighten me on the use of the colour red for this day as St Luke was not martyred. Is it because of the work of the Holy Spirit is specially recognised in St Luke: red being a colour of power and fire (tongues thereof)?
Jd.

I don't actually know but will try and find out.

For both the feasts of St. Luke and St. Mark red is the liturgical colour (and for the secondary feast of St. John on May 6th).