'Bringing the Mass to the People' Competition

Recently a comment was made regarding another post which sparked a few neural synapses in Rubricarius' old brain.

'The 1962 rite on the other hand mocks the traditional liturgy. If I recall correctly the turning point [for the commenter] was reading Fr McManus' Handbook for the new rubrics (1961), where in the introductory chapter he suggests future changes, effectively giving a perfect description of the 1970 rite. It somehow seemed dishonest to accept the 1950-62 changes, but not the 1963-70 changes to which they were clearly leading.'

I recall reading the same passage in McManus' book twenty or so years ago. (Incidentally, Mgr. Frederick R. 'Fred' McManus, R.I.P., was a delightful man to correspond with and kindly gave me his own copy of his book 'Pontifical Rite of the Restored Order of Holy Week' for strict reference purposes, not use, of course!) In his 1961 work 'Handbook for the New Rubrics' McManus indicated a number of likely revisions as the liturgical reform progressed as alluded to above. McManus lists what he regards as likely 'future developments':

'...an improvement ofthe selection of scriptural lessons, preferably in a cycle of several years; the celebration of the fore-Mass in choro..., the use of the vernacular languages for lessons, chants, the fore-Mass or even more of the liturgical rite; the chant or loud recitation of certain parts..., the elimination of preparatory prayers and of any rites after the blessing, the reduction of the offertory prayers of the celebrant etc, the introduction of a rite of true concelebration, the addition of some form of the oratio fidelium at the conclusion of the liturgy of the Word, provision of prefaces directly related to the paschal mystery, and, perhaps above all, rubrical and textual concern for the participation of the body of the faithful.' ('Handbook for the New Rubrics', Geoffrey Chapman, London, 1961 p.13)

McManus references a book by a fellow member of the American Liturgical Movement, H.A. Reinhold titled 'Bringing the Mass to the People' first published by Helicon in the USA in 1960. It was finding a copy of this in 1991 that confirmed my thinking on the history of twentieth century liturgical reform. By chance I opened the book at 'Appendix A'. "A resume of the liturgical resolutions of the liturgical congresses at Maria-Laach (1951), Ste Odile (1952) and Lugano (1953).
This resume is taken from the official report on the Third Liturgical Congress, held from September 15 to 18 in 1953, that was prepared by Luigi Agustoni and Johannes Wagner (published at Lugano by the Centro di Liturgia Pastorale) which sums up the two preceding congresses, incorporating the main resolutions taken at these meetings.
The first seventeen of these proposals had already been mentioned at the Maria Laach meeting two years previously.

1. Aboliton of the present duplication of readings.
2. Omission of the Judica, etc.
3. The second part of the Mass should be called: the Liturgy of the Word. It should be carried out in choro, not at the altar.
4. Never more than one Collect (with rare exceptions).
5. A three- or four-year cycle of Lessons and Gospels for Sundays.
6. Less frequent recitation of the Credo.
7. The Prex fidelium (Bidding Prayers) - should be reintroduced as the conclusion of the Liturgy of the Word. Omit the Dominus vobiscum at the beginning of the Offertory.
8. The sacred vessels should not be on the altar before the Offertory.
9. More Prefaces, but only those which refer to the Memoria Passionis.
10. The priest should wait for the end of the Sanctus to continue the Mass. The different Amens during the Canon should be eliminated.
11. No Confiteor, etc., at Communion time.
12. No Last Gospel. The Last Blessing ends the Mass.
13. Rename the Secreta: "Oratio super oblata", and make it the audible conclusion of the Offertory.
14. Sing the Great Doxology at the end of the Canon; eliminate its five signs of the cross and elevate the two Sacred Species during the Doxology. No genuflection before this elevation and perhaps no genuflection at all.
15. After the Pater noster: regroup the prayers and ceremonies and find a way to have the congregation participate in the Pax.
16. Develop the interval between Communion and Post-communion (prayers and singing, consult other liturgies).
17. Regulate the use of Ite, missa est and Benedicamus Domino (see the new regulation on Holy Thursday).

Proposals 18-26 had already been mentioned at the Conference at Ste Odile.
18. The revised Easter Vigil is the model of the principles which should govern future reforms.
19. Sing or recite aloud the Per ipsum (Great Doxology); no signs of the cross; elevate the two Species until the Amen of the people; no genuflection here, or only after the Amen [repeating no. 14].
20. No Amen after the Pater noster; sing or recite aloud the Libera nos; no sign of the cross with the empty paten, no kiss [anticipating the projects at Lugano].
21. Place the first Domine Jesu Christe immediately after the Libera (or suppress it entirely); follow the Pax Domini sit semper vobiscum with no ceremony of the Host; no response of the people; give Pax afterward (this is spelled out in detail on pp. 242-3 of the report).
22. Breaking of the Host takes place after the Pax, with no accompanying ceremony, while the congregation sings the Agnus Dei; at low Mass the priest says it after the Fractio. The two Communion prayers should then follow or be suppressed (see pp.242-4 of the report).
23. The celebrant receives half the Host, the other half is either given to those who serve at the altar or distributed with the ciborium.
24. No Confiteor, etc., at Communion time; shortening of the "Corpus" prayer during the distribution (p. 239 of the report elaborates the 1951 Maria Laach resolution).
25. Have the Communio sung solemnly during the distribution, even in the vernacular.
26. At the end of the Mass: Ite missa est (only), Deo gratias, kiss of the altar (no Placeat), blessing, and people's Amen. No Last Gospel or Leonine prayers.

These resolutions were proposed to the Sacred Congregation of Rites, and are the basis of most of the suggestions made in this book. We ask the readers to keep in mind, especially when this book seems to be bold or radical, that the company we are keeping consists of the cream of liturgical scholars." (Capitals and italics as in original) 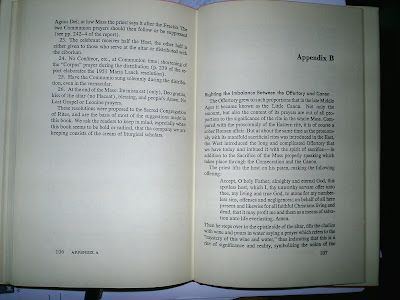 Bearing in mind the above was published in 1960 (and detailed accounts of the Congreses had appeared in Ephemerides Liturgicae and 'Worship' years earlier) before even the 1962 edition of the MR appeared I am offering a prize of either a copy of Ordo 2010 or a copy of Ordo 2011 (when printed) to the first reader who can indicate when the various proposals Reinhold describes were first adopted in the official liturgical books. Obviously some were adopted partially e.g. in the new Holy Week and then extended for general use.

The English writer Archdale A. King referred to the plans discussed at Lugano in his own book 'Liturgy of the Roman Church' (1957): ‘A revision of the solemn Mass, little short of revolutionary[my emphasis], was discussed at an international liturgical congress held at Lugano in September 1953, with the intention of simplifying the rite, removing what is redundant or superfluous, and giving the faithful a more active part in the liturgy.’ It does seem a rather classic example of the current revisionism that what King described as 'revolutionary' is now described as 'organic development' of the liturgy in some quarters. What is odd is how 'organic development' ceases when the same people who sat on a committee before the Council sat on a committee after the Council!
Posted by Rubricarius at 07:01

I hope this post will receive the attention it deserves!

I hope likewise. The aforementioned books should be sent to every traditional priestly society.

As I recall, Mr. King was a supporter of the simplification of the rubrics by Pius XII as well as the misnamed "Restored Order" of Holy Week. I would think that he was in favor of the liturgical revolution. Though in recognizing it to be revolutionary - the revolutionaries were, after all, the experts - they knew they had to contrive slogans in which to cloak their monstrous creation. Didn't Ellard (SJ, PhD - can you get more credentialed than that?) in Mass of the Future call it the "layman's Mass"? Didn't he and others invoke the words of S. Pius X's "dialogue Mass" in defense of their blasphemy?

I wish I could win your contest! I do love your Ordo; but wishes are not horses. I would venture a guess at 1970; by then, they certainly had achieved the fullness of their desires. The 1964 Missale was a stepping stone.

I agree with your assessment of Archdale King. King was an Anglican cleric who became a Catholic layman. No doubt infused with the Ultramontanism of the time however 'revolutionary' Rome was it had to be OK because Roma locuta etc.

I am going to hazard a guess at 1967. Although I don't believe an Editio Typica was issued, "Tres Abhinc Annos" seems to institute the changes referred to in your excellent article.