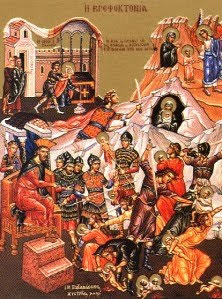 The feast of the Holy Innocents is a Double of the Second Class with a simple Octave. Today the altars and ministers change their recent festive colours to the violet of mourning. In practice, in larger churches, the most decorated violet vestments used for the Vigil of the Nativity and for the 'Gesima' Sundays (and Gaudete and Laetare Sundays) would be used this day. The feast of the Holy Innocents is unique in the Roman rite in that it changes its liturgical colour depending on whether it falls on a weekday or a Sunday. This year as the feast falls on a weekday it is celebrated in violet. When it falls on a Sunday, as it did last year, the feast is celebrated in red. The origin of this practice is a compromise between the differences in Gallican and Roman praxis.

Much of the Office comes from the Common of Several Martyrs. Mattins has nine lessons. The hymn Audit tyrannus anxius is proper to the feast. In the first nocturn the lessons are from the Prophet Jeremiah. In the second nocturn the lessons are taken from a sermon of St. Augustine on the Saints and in the third nocturn the eigth antiphon, Isti sunt, is proper and the homily on the Gospel is from the writings of St. Jerome on St. Matthew's Gospel. The Te Deum is not sung but a ninth responsory in its place, Isti qui amicti sunt. At Lauds a comemmoration is sung of the Octave of the Nativity.

At the Little Hours the hymns have their Doxology changed in honour of the Incarnation, the festal psalms are sung and at Prime the short lesson is of the feast, Hi empti sunt

At Mass the Gloria is not sung, the second collect is of the Octave of the Nativity. The Alleluia and its verse given in the Missal is not sung today but in its place the Tract Effuderunt sanguinem Sanctorum. The Credo is sung and the preface and communicantes are of the Octave of the Nativity. The beautiful solemn tone of Benedicamus Domino is sung as the dismissal, heard only on the Vigil of Christmas, Holy Innocents' Day and Masses pro re gravi.

Following the 'liturgical books of 1962' the feast of the Holy Innocents looses its penitential aspect (and Octave!) and is celebrated in red. The Te Deum replaces the ninth responsory. At the Hours the hymn tones and conclusions are ordinary and the psalmody is ferial. At Prime the short lesson is of the season. At Mass the Gloria and Alleluia are sung. The Tract and magnificent Benedicamus Domino are never heard. At Vespers there is only a commemoration of the Octave of the Nativity.
Posted by Rubricarius at 09:04

Are relics to be placed on the altar?

I cannot see why not. Although there is a penitential aspect to the day it is still a high-ranking feast.

To which tone of Benedicamus Domino do you refer?