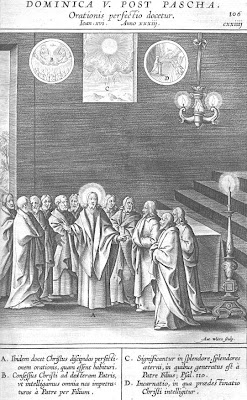 The fifth Sunday after Pascha is of semi-double rite. The Gospel pericopes from St. John describe how the LORD tells His disciples to ask for anything in His name after He has ascended to the Father. That Ascension will, of course, be celebrated on Thursday after the three days of the Lesser Litanies on Monday, Tuesday and Wednesday.

At Vespers yesterday afternoon the psalms of Saturday were sung under the single antiphon Alleluia. Commemorations were sung of the preceding Office of St. Augustine of Canterbury and St. Mary Magdalen dei Pazzi. At Compline Te lucis was sung with the Paschal Doxology and the Dominical preces were omitted due to the occurring double feast.

At the Hours the hymns are sung with the Paschal Doxology. At Prime the Dominical preces are sung.

Mass is sung after Terce. The Gloria is sung, the second collect is of St. Mary Magdalen dei Pazzi, the third collect is Concede nos, the Credo is sung and the preface is that of Paschaltide.

At Vespers commemorations are sung of St. Mary Magdalen dei Pazzi and St. Felix. These are followed by the Commemoration of the Cross. At Compline Te lucis is sung with the Paschal Doxology and the Dominical preces are sung.