The Dedication of St. Mary of the Snows 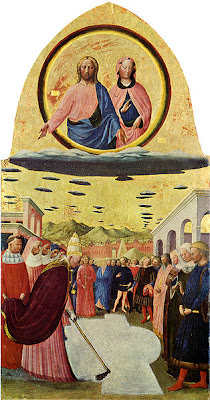 This feast of the Dedication of St. Mary of the Snows is of greater-double rite and commemorates the dedication of the Basilica of St. Mary Major or Santa Maria Maggiore in Rome. Popular tradition has it that a miraculous fall of snow delineated the original ground plan of the church that was dedicated during the pontificate of Liberius. The feast appears in the Martyrologium Hieronymianum. In the late Middle Ages it appears in Radolfo di Rivo's Liber de officis Ecclesiasticis as a feast particular to the Diocese of Rome. Pius V made it a double feast in the 1568 Breviary and Clement VIII raised it to a greater double thirty or so years later.

The feast began with Vespers yesterday afternoon. The antiphons Dum esset Rex etc were sung with the psalms of first Vespers from the Common of feasts of the BVM. The Office hymn is Ave, maris stella. A commemoration was sung of the preceding Office of St. Dominic. At Compline Te lucis was sung to the melody of hymns in honour of the Incarnation with the Doxology Jesu tibi sit gloria, Qui natus es de Virgine etc.

At the Little Hours the psalms are festal, the hymns have the melody and Doxology of the Incarnation. At Prime the versicle in the short responsory is Qui natus es and the short lesson In plateis.

Mass is sung after Terce. The Mass formularly is Salve, sancta Parens. The Gloria is sung, the Creed is sung and in the preface of the BVM Et te in Festivitate is inserted.

In the 'liturgical books of 1962' the feast of St. Mary of the Snows has been reduced to a III class feast with one nocturn of three lessons. There is no first Vespers and no commemoration of the feast at Vespers of St. Dominic. At Mattins the antiphons and psalms are from the ferial psalter and the first and second lesson are from the Friday of the seventh week after Pentecost (not the Friday of the first week of August which would be occurring scripture in the Traditional rite). At the Hours the hymns are sung to the ordinary tone and there is no Doxology in honour of the Incarnation. At Prime and the Hours the ferial psalter is used. At Mass the Creed is omitted. Despite being a II class the Transfiguration does not have first Vespers so Vespers today are Vespers of the Dedication of St. Mary of the Snows, with the ferial psalms, without a commemoration of the Transfiguration.

When was the rank of greater double instituted?

According to received opinion in 1602.