In the 'liturgical books of 1962' the fabricated, committee manufactured rites of Holy Week were used as a type of 'trial run' for some of the worst of the later reforms. Palm Sunday suffered extensively from the ‘restoration’ without even a pretext of supposedly authentic times of celebration. The magnificent rites described above were mutilated almost beyond recognition now like some scarred parody of the traditional rites.

The very name Palm Sunday was re-branded as the 'Second Sunday of the Passion or Palm Sunday'. At Compline yesterday the Dominical preces are never said. Mattins is slashed down to a single nocturn of three lessons. At Lauds there are never commemorations. Prime has the hitherto festive arrangement of Pss. 53 and the first two divisi of psalm 118. However, it is the blessing of Palms and Mass that have been mutilated in a savage way.

At the blessing of Palms red becomes the liturgical colour - extended in the 'Ordinary Form' of the 1962 liturgy for the entire day. Based on use of red in several Mediaeval rites the reformers ignored the distinction between Passiontide red (a dull ‘ox-blood). The Asperges is omitted for some peculiar reason as it would later be in 99.99% of churches. The ministers wear the festive dalmatic and tunicle, along with the celebrant's chasuble of red colour for the blessing, or what remains of it, and procession. An additional subdeacon may carry the, unveiled Processional Cross. 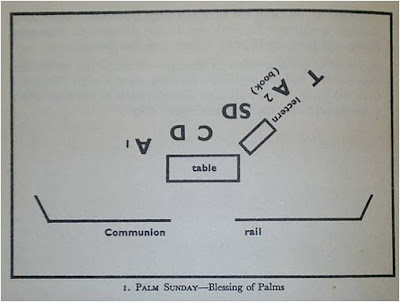 The above is from J.B.O'Connell's 'The Ceremonies of Holy Week', Burns Oates, 1960. O'Connell mentions that the table may be placed on the footpace of the altar to facilitate the people's view. In that case he says, the celebrant kisses the table, ft.nt. 5, p.20 - kitchen tables in the sanctuary here we go!

In practice this parody of the former rite looks like the photographs below from the FSSP. 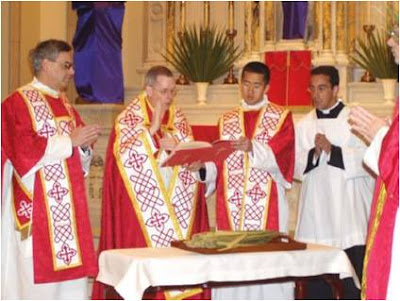 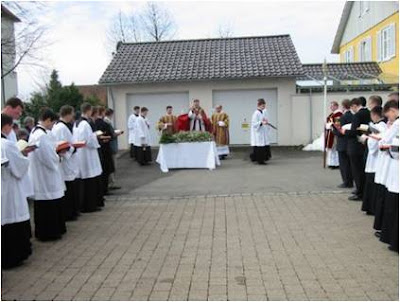 The procession follows. In another break with tradition an additional subdeacon, as mentioned above, rather than the subdeacon of the Mass, carries an unveiled Cross. The first three antiphons of the Old Rite are suppressed. The first antiphon sung is Occurunt turbae (with its former constituent Hosanna in excelsis suppressed), then Cum angelis and Turba multa. Then a new antiphon Coeperunt omnes followed by the Gloria laus. However, vernacular hymns in honour of Christ the King may be sung. Then Lauda, Jerusalem, Fulgentibus palmis, Ave, Rex noster and Ingrediente. There is no ceremonial re-entry, although as noted below a considerable amount of cheating and dishonesty goes on with followers of the perverted rite. When the ministers reach the sanctuary they reverence the altar then turn, versus populum, to sing a collect introduced to the rite Domine Jesu Christi, Rex ac Redemptor noster. This collect is found in many medieval uses as a collect said at the Rood.

The sacred ministers then change in schizophrenic style from red to violet. No folded chasubles of course, but dalmatic and tunicle. The prayers at the foot of the altar are suppressed and the celebrant merely kisses the altar and censes it. In the Ordinary Form of the 1962 rite this omission goes several stages further and everything is omitted until the collect. The deacons of the Passion receive a blessing, rather than the deacon of the Mass, and sing a cut down version of the Passion. The Passion text is Matthew 26: 36-75; 27: 1-54. (Actually largely restored in the Ordinary Form). The former Gospel is omitted both textually and ceremonially. Palms are not held during the singing of the Passion. The dismissal is Ite, missa est and the last Gospel is suppressed.

The ceremonial re-entry into the church after singing Gloria laus et honor, with a choir inside the church was supressed in the 1956 deforms along with the knocking on the door with the foot of the Processional Cross. Following the rubrics of the deformed rite one is supposed to have Gloria laus et honor sung antiphonally with the people before the procession even approaches the church door. One can only reflect on this formerly magnificent day on the sheer wickedness of old Pius XII's actions. The new form, a classic of inorganic committee work created liturgy, tried to give the Procession greater prominence but rather like a Victorian architect 'restoring' a medieval church mutilated it in the process. There is something intrinsically odd about wearing red vestments - a festive colour in the Roman rite - and then changing to a penitential colour for the Eucharistic Sacrifice. In the Roman rite this is an inversion of received praxis and hitherto whilst Processions may have been in violet, penitential, vestments the Mass afterwards, if there was a colour change, was always festive e.g. Candlemass (violet to white), St. Mark as titular (violet to red). As on other days in the 'restored' Holy Week the opportunity was taken to make changes that would be later extended to the entire liturgical year e.g. the obsession with versus populum, introduction of the vernacular, the suppression of the preparatory prayers at the altar steps, the suppression of the last Gospel etc.

It is interesting to see photographs on websites such as New Liturgical Movement. The photographs of ‘EF’ Palm Sunday such as here and those of the‘OF’ form of 1962 Palm Sunday look remarkably similar and both appear to have far more in common that either has with the traditional Roman rite.
Posted by Rubricarius at 07:01

Email ThisBlogThis!Share to TwitterShare to FacebookShare to Pinterest
Labels: the Rubbish