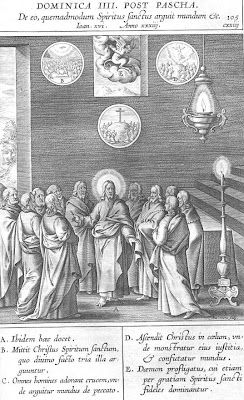 The fourth Sunday after Pascha is of semidouble rite. The Gospel pericopes are from the sixteenth chapter of St. John's Gospel where the LORD talks of His ascending to Heaven and the coming of the Paraclete. The Epistle at Mass and the first nocturn lessons, this year, are from the Epistle of St. James. The Epistle begins with the beautiful passage "Omne datum optimum, et omne donum perfectum desursum est, descendens a Patre luminum, apud quem non est transmutatio, nec vicissitudinis obumbratio." Every good gift and every perfect gift is from above, and cometh down from the Father of lights, with whom there is no variableness, neither shadow of turning.

At Vespers yesterday afternoon the psalms of Saturday were sung under the single antiphon Alleluia. The Office hymn was Ad regias Agni dapes. After the collect of the Sunday commemorations were sung of te preceding Office of St. Pius V and of St. John before the Latin Gate. The Commemoration of the Cross was omitted due to the double feasts. At Compline Te lucis was sung with the Paschaltide Doxology and the Dominical preces were omitted.

At Mattins the invitatory and hymn are sung as previous Sundays of Paschaltide. In the first nocturn the lessons are the Incipit of the Epistle of St. James. In the second nocturn the lessons are taken from the Treatise of St. Cyprian on the boon of patience. In the third nocturn the homily is from St. Augustine. At Lauds the Sunday psalms are sung under a single antiphon, Alleluia. After the collect of the Sunday a commemoration is sung of St. John before the Latin Gate. The Commemoration of the Cross is omitted.

At the Hours the hymns have the Paschaltide Doxology, the psalms are sung under a single antiphon consisting of a triple Alleluia. At Prime the Dominical psalms are sung (Pss. 117, 118i & 118ii). The Dominical preces are omitted because of the commemoration of the greater double feast.

Vespers are of the Sunday. The Sunday psalms are sung under the single antiphon, Alleluia. The Office hymn is Ad regias Agni dapes. After the collect of the Sunday commemorations are sung of the following feast of St. Stanislaus and of St. John before the Latin Gate. The Commemoration of the Cross is omitted as are the Dominical preces at Compline.

In the 'liturgical books of 1962' there are no commemorations at Vespers, and the Commemoration of the Cross has been abolished as are the Domincal preces. Mattins is slashed down to a single nocturn. The hymns at the Little Hours do not have the Paschaltide Doxology. At Mass there is a single collect only and a proper last Gospel is only said on one occassion in the entire year. There are no commemorations at Vespers. St. John before the Latin Gate has been struck from the Calendar.