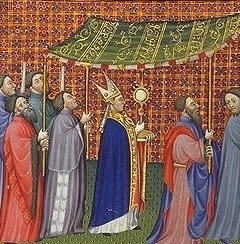 Sunday within the Octave of Corpus Christi, the Second Sunday after Pentecost, is of semi-double rite. Today the altars and vestments of the traditional Roman rite are of the finest white in honour of the Octave of the feast of the Sacrament of the LORD's Passion, Death and Resurrection.

At Mattins the invitatory is Christum Regem adoremus dominantem Gentibus: Qui se manducantibus dat spiritus pinguedinem. The Office hymn is Sacris solemnis. The antiphons and psalms are as on the feast of Corpus Christi. The lessons are proper to the Sunday. In the first nocturn they are taken from the First Book of Kings. In the second nocturn they are taken from a sermon of St. Chrysostom to the people of Antioch and the homily in the third nocturn is from St. Gregory on St. Luke's Gospel. The Te Deum is sung. At Lauds the antiphons are those sung on the feast of Corpus Christi, Sapientia etc. The chapter is of the Sunday, the hymn as on the feast. The antiphon on the Benedictus and collect are of the Sunday. After the collect of the Sunday commemorations are sung of the Octave of Corpus Christi and St. Margaret.

Mass is sung after Terce. The Gloria is sung, the second collect is of the Octave, the third collect of St. Margaret. The Creed is sung and the preface is that of the Nativity.

In Collegiate and Cathedral Churches a Mass of the feast is sung after None with Gloria, second collect of the Sunday, the Sequence Lauda Sion, Creed, preface of the Nativity and last Gospel of the Sunday. After this a Procession is made as on the feast.

In the 'liturgical books of 1962' Sunday within the Octave of Corpus Christi has been abolished. The Second Sunday after Pentecost is celebrated as a 'green' Sunday. Mattins is stripped down to one nocturn of three lessons with the invitatory and antiphons of the Sunday. There are no commemorations at either Vespers, Lauds or Mass. The hymn tones are not those of the Nativity, the Doxology has gone, the versicle at Prime is Qui sedes. The Octave of Corpus Christi has been abolished.
Posted by Rubricarius at 07:01

Whatever of the liturgical books of 1962, I attended Vespers in Rome at Santissima Trinita dei Pellegrini on this Sunday, and was treated to Vespers of Sunday in the Octave of Corpus Christi (right down to the commemoration of the Sunday)... alas, I was the only layman present (assuming those in choir were all clergy).

By the time Vespers was ending and Benediction was impending, a few others arrived; more were present by the time Benediction was on, but it became evident that the arrivals were in fact coming for the Low Mass that followed. Having already heard High Mass that morning ("of the external solemnity" of Corpus Christi, as was said in the sermon), I headed off.