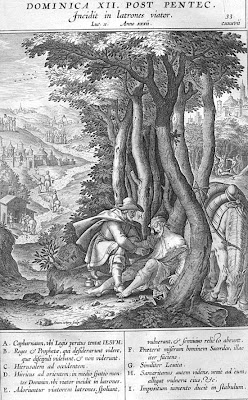 The twelfth Sunday after Pentecost is of semi-double rite and its liturgical colour is green. This year it is the fourth Sunday of August and the Sunday within the Octave of the Dormition (Assumption) of the Mother of God. The Gospel pericopes from St. Luke contain the parable of the Good Samaritan.

At Vespers yesterday afternoon the psalms of Saturday were sung. The Office hymn was Jam sol recedit igneus (sung with the melody and Doxology of the Incarnation) and the antiphon on the Magnificat was Sapientia for the Saturday before the first Sunday of September. After the collect of the Sunday a commemoration was sung of the preceding day within the Octave of the Virgin's Dormition with that most sublime of all collects, the priceless jewel of the Roman rite, Famulorum tuorum, followed by a commemoration of St. John Eudes. The Suffrage of the Saints was omitted as were the Dominical preces at Compline due to the Octave and double feast. At Compline Te lucis was sung with the melody and Doxology of the Incarnation.

At Mattins the invitatory and hymn are as on preceding 'green' Sundays. In the first nocturn the lessons are the Incipit of the Book of Ecclesiasticus. In the second nocturn the lessons are taken from the Book of Morals by St. Gregory the Great and in the third nocturn the homily on the Gospel is from the writings of the Venerable Bede. The Te Deum is sung. At Lauds, after the collect of the Sunday, commemorations are sung of St. John Eudes and of the Octave. The Suffrage of the Saints is omitted due to the double feast and Octave.

At Prime both Quicumque and the Dominical preces are omitted but Jam lucis, and the hymns of the other Horae Minores, are sung with the melody and Doxology of the Incarnation. The verse in the short resposory at Prime is Qui natus es.

Mass is sung after Terce. The Gloria is sung, the second collect is of St. John Eudes, the third collect is of the Octave. The Creed is sung and the preface is that of the Blessed Trinity.

In those ancient 'liturgical books of 1962' this year the XII Sunday after Pentecost is the third Sunday in August. The great Octave has been abolished. At Vespers yesterday afternoon the hymn was sung without the Doxology of the Incarnation. The antiphon on the Magnificat was Omnis sapientia and there were no commemorations. At Compline the preces are omitted, always. Mattins is cut down to a single nocturn of three lessons and they are from the Book of Wisdom. At Lauds there are no commemorations and no Suffrage. At Prime the verse in the short response is Qui sedes etc. At Mass there is a single collect. At Vespers there are no commemorations and no Suffrage.