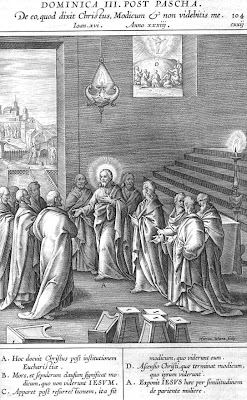 The Third Sunday after Pascha is of semi-double rite and its liturgical colour is white. It is also the Sunday within the Octave of the Solemnity of St. Joseph. The Gospel pericopes from St. John 16 have the LORD telling the Disciples that in a little while He will be going to the Father.

At Vespers yesterday afternoon the psalms of Saturday were sung under the single antiphon Alleluia. The Office hymn was Ad regias Agni dapes. After the collect of the Sunday commemorations were sung of the preceding Office of the fourth day within the Octave and of St. Anselm. At Compline Te lucis was sung with the Paschal Doxology, the Dominical preces were omitted due to the occurring double feast and Octave.

At Mattins the invitatory is the great proclamation of the Resurrection, Surrexit Dominus vere, Alleluia. The Office hymn is Rex sempiterne Caelitum. In the first nocturn the lessons are the Incipit of the book of the Apocalypse of St. John. In the second nocturn the lessons are taken from a sermon of St. Augustine and in the third nocturn St. Augustine also provides the homily on St. John's Gospel. At Lauds, after the collect of the Sunday, commemorations are sung of St. Anselm and of the Octave of St. Joseph.

At Prime and the Hours the hymns have the Paschal Doxology. At Prime the Dominical preces are omitted due to the occurring double feast and Octave.

Mass is sung after Terce. The Gloria is sung, the second collect is of St. Anselm, the third collect is of the Octave. The Creed is sung and the Paschaltide preface is sung.

Masses other than Conventual Masses may all be of the Solemnity of St. Joseph. Before the reform of 1011-13 this feast was celebrated on the Third Sunday after Pascha. The Mass Adjutor is sung, as on the feast. The Gloria is sung, the second collect is of the Sunday, the Creed is sung. The preface is of St. Joseph and the last Gospel is of the Sunday. The liturgical colour is white.

Vespers are of the Sunday with the psalms sung under a single antiphon. After the collect of the Sunday commemorations are sung of the following Office of SS Soter and Cajus, St. Anselm and of the Octave. At Compline the Domincal preces are omitted due to the occurring double feasts and the Octave.

In the 'liturgical books of 1962' there are no commemorations at either Vespers. Mattins is cut down to a single nocturn of three lessons. There are no commemorations at Lauds or Mass. The feast and Octave of the Solemnity of St. Joseph have been abolished - indeed most 'Traddies following their 'ancient' liturgy are blissfully unaware of even its existence. At the Hours the hymns are sung without the Paschal Doxology. Mass has a single collect.