The Vigil of Pentecost is a semi-double Vigil of the first class. No feast may be celebrated on this day. The ceremonies that take place before Mass are similar to those of Holy Saturday and are closely linked to the historical praxis of also conferring baptism at Pentecost.

The liturgical colour of the Office is white. At Mattins the invitatory, hymn, antiphons and psalms are all as on the feast of the Ascension except the antiphons are not doubled. The lessons in the first nocturn are the Incipit of the Epistle of the Apostle Jude. In the second nocturn the lessons are from a discourse of St. Augustine to catechumens on the Creed - note the baptismal connection. In the third nocturn the lessons are taken from St. Augustine's tracts 74 & 75 on St. John's Gospel. The eighth responsory is of the Sunday within the Octave of the Ascension, Si enim etc. The Te Deum is sung.

At Lauds the antiphons Viri Galilaei etc are sung with the Sunday psalms (92, 99, 62, Benedicite & 148). The chapter, hymn antiphon on the Benedictus and collect are as on the Sunday within the Octave of the Ascension but the Octave is not commemorated. After the collect of the day a commemoration is sung of St. Venantius.

On Saturday morning, before the Horae Minores, the altar is vested in festal red, then covered with both a violet and then white antependia. The altar candles are lit. At the Little Hours the hymns are sung with the Doxology of the Ascension, Jesu tibi sit gloria, Qui scandis super sidera etc, sung to Tone4. At Prime the antiphon Viri Galilaei is sung with psalms 53, 118i & 118ii. The first entry in the Martyrology is that of the great feast of Pentecost, Dies Pentecostes, quando Spiritus Sanctus Jerosolymis super discipulos igneis linguis advenit. At the other Hours the antiphons from Lauds are sung with the Dominical psalms. After None the candles are extinguished and the white antependium is removed.

The celebrant in violet chasuble, assisted where possible by deacon and subdeacon in violet folded chasubles, comes to the altar preceded by acolytes who do not bear candles. The celebrant kisses the altar at the centre and goes to the epistle corner. The celebrant begins reading, in a low voice, the first of six prophecies at the Epistle corner, the ministers stand as at the introit of Mass. Meanwhile a lector comes to a lectern in the middle of choir accompanied by the 2nd MC, reverences the altar and choir and then chants the first prophecy. The celebrant and ministers may sit after reading the prophecy returning to the altar as the lector finishes chanting the same. After the prophecy has been sung the celebrant sings Oremus, but unlike Holy Saturday without Flectamus genua and Levate as it is Paschaltide, and sings the first collect Deus, qui in Abrahae. The collects are proper to the Vigil and, again, are rich with baptismal references. 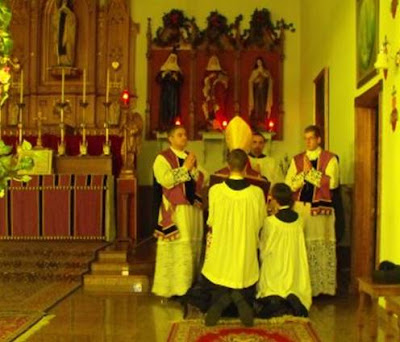 (The photographs are from the website of Saint Gertrude the Great church in Ohio, USA shewing their 2010 Pentecost Vigil. They were, I believe, the first photographs of the ceremonies of the Vigil of Pentecost to appear on the Web.)

During the sixth prophecy, if there is a font, the acolytes light their candles on the credence table. A server lights the Paschal Candle and then holds it near the credence. The celebrant goes to the sedilia and removes the chasuble and maniple and puts on a violet cope. The ministers remove their maniples. A procession is now formed. The Paschal Candle bearer leads followed by Crucifer between acolytes. The choir sings Sicut cervus as the procession heads to the Baptistery. 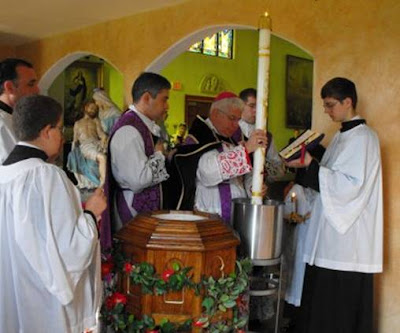 At the entrance to the Baptistery the collect Concede, quaesumus is sung (as opposed to Omnipotens sempiterne Deus that is sung on Holy Saturday). Everything then is done to bless the font as on Holy Saturday with the solemn blessing of the water and infusion with Chrism. The Paschal Candle is plunged three times into the waters of the font. Before the infusion with Chrism everyone in the church is aspersed, as on Holy Saturday, and the blessed water is reserved for use at the Vidi aquam tomorrow. Where there are catechumens the baptisms now take place. During the blessing of the font cushions are laid in the sanctuary for the celebrant and ministers to prostrate on when they return. 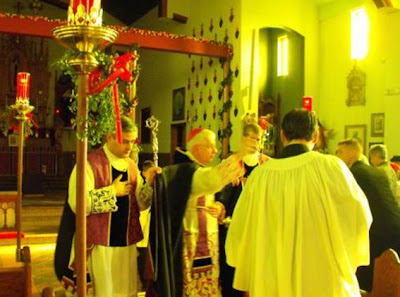 When the procession enters the sanctuary the candle bearer takes the Paschal Candle back to the sacristy and extinguishes it. The Crucifer and acolytes go to the credence. The cantors kneel in the middle of the choir. The celebrant and ministers go to the sedilia and remove their vestments. They then prostrate on the cushions before the altar, all others kneel. After the invocation Peccatores the celebrant and ministers rise and return to the sacristy where they vest in red. Meanwhile servers remove the violet antependium etc and vest the altar for festal Mass. The altar candles are now lit. Where there is no font after the sixth prophecy the cushions are laid on the altar steps and the Litany follows.

As the choir sing Agnus Dei the procession returns to the sanctuary. Mass follows as usual except, like Holy Saturday, it has no introit. During the Gloria the bells are rung. There is only one collect. At the Gospel the acolytes do not carry candles. The Creed is not sung. The communicantes and Hanc igitur are of Pentecost. Unlike the Mass of Holy Saturday the Agnus Dei is sung, there is a communion verse and there is no interpolation of Vespers. 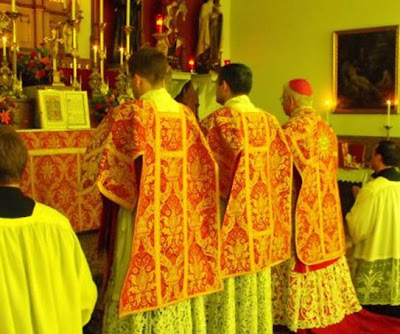 In the 'liturgical books of 1962' the sacred ceremonies of the ancient Vigil of Pentecost have been excoriated. At Mattins the ferial psalms are used, there is but one nocturn of three lessons, the former third nocturn homily. At Lauds and the Hours the ferial psalms are sung. The prophecies, blessing of the font and Litany are all completely gone. The Vigil ceremonies were suppressed in churches where the, then optional, 1952 form of the Easter Vigil was introduced and then universally in 1956 with the New Order of Holy Week. As no one could argue that the time of the Pentecost Vigil was, putatively, wrong its reason for suppression was clearly lest it reminded the faithful of the traditional Ordo. Mass has the introit added (previously this was only used in private Masses). A commenter and friend noted a couple of years' ago the irony of having a proper Hanc igitur which says "Wherefore we beseech Thee, O LORD, to graciously receive this oblation which we they servants... make to Thee... offering it up in a like manner with those also whom Thou hast been pleased to make to be born again of water and the Holy Ghost" when the ceremonies to which it refers have been annihilated in the 'ancient' Missal of the 1960s. In the 'Ordinary Form' of the 1962 rite the Pentecost Vigil has been restored (in part at least but still without the blessing of the font) in the 2002 edition of the Roman Missal.
Posted by Rubricarius at 07:01

Email ThisBlogThis!Share to TwitterShare to FacebookShare to Pinterest
Labels: Semi-Double, Vigil of Pentecost

Benedict XVI taught that:
'The last version of the Missale Romanum prior to the Council, which was published with the authority of Pope John XXIII in 1962 and used during the Council, will now be able to be used as a Forma extraordinaria of the liturgical celebration. It is not appropriate to speak of these two versions of the Roman Missal as if they were “two Rites”. Rather, it is a matter of a twofold use of one and the same rite.'
Letter to the bishops accompanying Summorum.

A small hurrah for that, then.