Our Patron - The Feast of St. Lawrence the Deacon 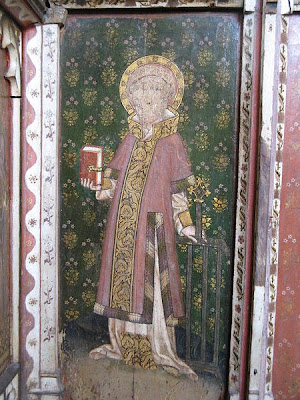 The feast of St. Lawrence is a Double of the Second Class in the Universal Kalendar and, amongst many other things, Patron of the Saint Lawrence Press. St. Lawrence's body is interred in the basilica of St. Lawrence-without-the-Walls in Rome. St. Lawrence was the first of the seven Roman deacons and known for his generosity to the poor. He was martyred in 258, according to tradition, on a grid iron and asked his tormentors to turn him over as his flesh was fully roasted on the one side. The liturgical colour of the feast is red. St. Lawrence is listed in the Communicantes of the Canon. The feast is ancient and appears in the Leonine and other early sacramentaries.

The Saint Lawrence Press came into being when the English branch of the SSPX stopped publishing the Ordo in 1983, a decade after the traditional Ordo had first been re-created for the first time thanks to the combined genius of Fr. Peter Morgan and Mr. John Tyson. St. Lawrence was chosen as patron by the new publishers as he was a munificent deacon and whose feast had both a Vigil and an Octave, features of the classical Roman liturgy which were fast disappearing at the time with the SSPX's universal abandonment of the traditional rite that year in favour of the 'liturgical books of 1962'. Prior to 1983 many clergy within the SSPX took the Ordo ranging from such diverse, and now opposed, figures as Richard Williamson to Franz Schmidberger.

Celebration of the great feast began yesterday (with a Vigil by way of preparation) afternoon with first Vespers. The antiphons Laurentius ingressus est martyr etc were sung with psalms from the Common of Apostles, Pss. 109, 110, 111, 112 & 116. The Office hymn was Deus, tuorum militum. The chapter, antiphon on the Magnificat and collect were proper, the rest of the Office from the Common of Martyrs. A commemoration was sung of the preceding Office of St. John Mary Vianney.

Mass is sung after Terce. The Gloria is sung and the Common Preface is sung.

At second Vespers the antiphons Laurentius etc are again sung, at this Office with psalms 109, 110, 111, 112 & 115. The V&R are proper to the feast. After the collect of the feast a commemoration is sung of the Sunday, the antiphon on the Magnificat being Ego in altissimis for the Saturday before the second Sunday of August. At Compline the Dominical preces are omitted.

In the 'liturgical books of 1962' the feast loses first Vespers. (St. John Mary Vianney is celebrated on the 8th August and so yesterday had ferial Vespers with the collect of the Vigil - very odd as in the traditional rite the Office of a Vigil ends at None). At the Hours the ferial antiphons and psalms are sung and at Prime the lectio brevis is of the season.

Greetings and good wishes for your feast of title and may the Ordo and your posts continue to do good work. A.R.

A blessed celebration of the Octave Day to you.