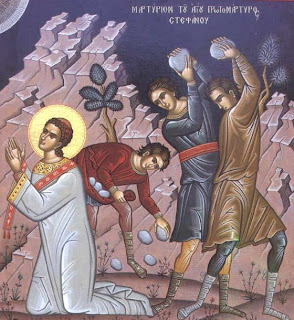 Today is the feast of St. Stephen the Protomartyr. The feast is a Double of the Second Class with a simple Octave. The liturgical colour of the day is red. Many saints, originally more than now, were celebrated around the Nativity of the LORD. These were described as the 'comites Christi' . e.g. St. James the Lesser and King David. In 'modern' calendars we are left with St. Stephen, St. John the Evangelist, and the Holy Innocents although St. David the King is in the Kalendar as a greater double on the 29th December in the Patriarchate of Jerusalem.

At Vespers the antiphons and psalms are from Second Vespers of the Nativity but from the chapter they are of St. Stephen. The Office hymn is Deus, tuorum militum, sung with the Doxology and melody of the Incarnation. After the collect of the feast commemorations are sung of the following feast of St. John the Evangelist and of the Octave of the Nativity of the LORD.

Email ThisBlogThis!Share to TwitterShare to FacebookShare to Pinterest
Labels: Double II Class, Octave, Within the Octave