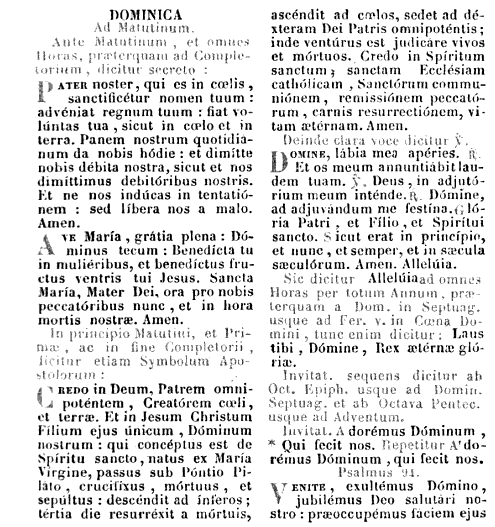 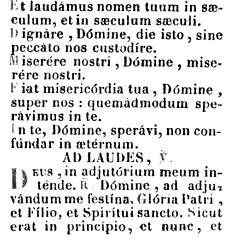 The two images above come from an 1861 copy of the Breviarium Romanum available on Google Books. In the pre-1914 Breviary there was no 'Ordinary of the Divine Office' and after the initial pages of rubrics, calendar and tables Sunday at Mattins was printed followed by the rest of the Office for Sundays, then Mattins and Lauds for the other Days, then Vespers for the other days and finally Compline. One can clearly see from the above that the Pater, Ave and Credo are said before Mattins yet nothing is said before Lauds and the presumption that choral Office is taking place and that Lauds will form one service with Mattins. 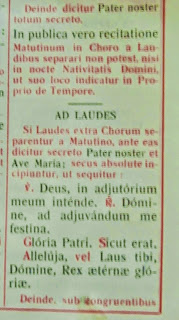 Above is a photograph from the Hiemalis volume of a 1932 Dessain Breviary set (indeed the set used for compiling the Ordo). The introduction of the 'Ordinary' makes the book more 'user friendly'. One can see quite clearly that the traditional praxis is now made very clear in the rubrics. In public Office Mattins and Lauds are never separated - with one sort of exception at Christmas. Mattins of the Nativity of the LORD are sung then the Missa in Gallicantu follows immediately. After the last Gospel then Lauds follow so there is really one service, the choir remaining in their places throughout. One can see too the very clear direction that in private recitation of the Office, when Lauds may be separated from Mattins, then a Pater and Ave are said before the Deus in adjutorium.

From the 1st January 1961 the traditional praxis for the Roman rite changed with Rubricarum instructum coming into force and it was possible to have choral Mattins and Lauds as two distinct and separate services. This really is basic history of the twentieth century reform of the liturgy but some people out there do seem to want to obscure facts in the fabrication of their constructs.

I am assuming this post is a follow-up to your comment on the Rad Trad's blog: "Lauds, as its own service, didn't exist in the Roman rite either until 1st January 1961."

I was under the impression that in the Roman Office, one could anticipate tomorrow's Matins after today's Vespers (was that permitted as a venue of convenience, or is it a valid expression of the Roman rite?). Furthermore, is it not true that the ancient Roman and Monastic Offices actually arranged the nocturnes of Matins in the middle of the night as if they were separate Hours, and then Lauds at daybreak--rather than the Tridentine practice of combining Matins-Lauds?

As ever, many thanks for your wonderful exploration of the history of our venerable Rite.

Today, 15 July, the Romano-Seraphic books keep a special feast indeed: the double major of The Most Holy Sepulchre, on the anniversary of the victory in the First Crusade that retook the church.

Sadly, this feast was gone by the time of the 1962 edition...which, incidentally, actually preserved the three nocturns of Matins on all Sundays...a mark of some sense, at least, in the Franciscan liturgical offices.

I recall having a conversation with a cleric of the FSSP. We happened to be travelling by plane at the same time. When he saw me close up my Breviary toward evening's end, he asked if I had "anticipated Matins". I replied: "Followed by Lauds, too, of course." He was shocked!

In the old Roman secular Office there was, at one time, a double Office with a ferial nocturn sung with the addition of a festal nocturn when the Calendar required all in the late evening. Getting up at different times during the early hours maybe a Monastic habit but not a secular one.

I struggle with what I can manage personally against the integral unity of Matins and Lauds. At this time in my life I'm trying to get in the days hours, starting with Lauds in the morning even if I can't manage Matins. Obviously I'd rather anticipate both the evening before, but that isn't terribly practical the moment.

Is permitting the offices to be separated in private recitation (by indult, say) a modern innovation, or is there some history to it?

In my view if for whatever reason one cannot celebrate (ha!) say Mattins and Lauds then the best thing is to start the new day with Prime.

sounds like a bunch of stuff that Jesus rebuked the scribes and Pharasees for. Mumbling rote writings under ones breath or out loud or even silently. Maybe i will go to hell , i try to do good and be kind, not hurt others, help if i can but this sounds like nonsense.