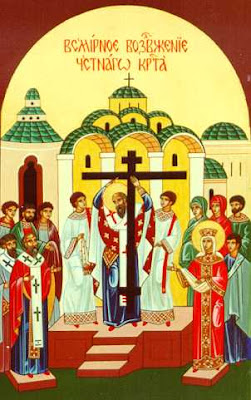 Today is the feast of the Exaltation of the Holy Cross. It is of greater double rite and takes precedence, as a feast of the LORD, over the 'green' Sunday. The origin of the feast was the dedication of Constantine's basilica in Jerusalem in 335. The feast appears to have been celebrated in Rome since the seventh century. A double feast in the Tridentine Missal of 1570 it was raised to greater double rank by Clement VIII. The liturgical colour of the feast is red. The fourteenth Sunday after Pentecost, and this year the third Sunday of September, is commemorated at Vespers, Mattins, Lauds and Mass.

At Vespers yesterday afternoon the antiphons O magnum pietatis opus etc were sung, doubled, with psalms 109, 110, 111, 112 & 116. The Office hymn was the magnificent Vexilla regis. After the collect of the feast a commemoration of the Sunday was sung (the antiphon on the Magnificat being Ne reminiscaris for the Saturday before the third Sunday of September). The Suffrage was omitted due to the double feast as were the Dominical preces at Compline.

At Mattins the invitatory is Christum Regem, pro nobis in Cruce exaltatum, Venite adoremus. The antiphons and responsories for the three nocturns are proper. The lessons in the first nocturn are taken from the Book of Numbers with the account of Moses and the brazen serpent, a prefigurement of the Cross. In the second nocturn the lessons describe the taking of the Cross from Jerusalem and its triumphant return. In the third nocturn the lessons are from a homily on the Passion of the Lord from St. Leo the Great. The ninth lesson is of the Sunday, a homily from St. Augustine on St. Matthew's Gospel. The Te Deum is sung. At Lauds the antiphons O magnum pietatis opus etc are, again, sung this time with Pss. 92, 99, 62, Benedicite and 148. The Office hymn is Lustra sex. After the collect of the feast a commemoration of the Sunday is sung.

At the Hours the O magnum pietatis opus etc are sung in the usual order. At Prime (Pss. 53, 118i & 118) both Quicumque and the Dominical preces are omitted, the lectio brevis is proper, Humiliavit semetipsum.

Vespers see a colour change to white and first Vespers of the following feast of the Seven Sorrows of the Blessed Virgin. The antiphons Quo abiit etc are sung, doubled, with Pss. 109, 112, 121, 126 & 147. The Office hymn is Ave, maris stella. After the collect of the feast commemorations are sung of the preceding feast of the Exaltation of the Cross and of the Sunday. At Compline Te lucis is sung with the Doxology proper to the feast of the Seven Sorrows, Jesu tibi sit gloria, Qui passus es pro servulis etc. The week ahead will be that of the September Ember Days.

In the 'liturgical books of 1962' although the feast has been raised in rank to 'second class' (connected with the abolition of the May feast of the Invention of the Holy Cross) it loses first Vespers with the exception of when it falls on a Sunday. The Sunday is not commemorated being considered an identical mystery with the feast. If the Sunday were to be commemorated it would be the second Sunday of September not the third. At the Little Hours the antiphons for the Sunday, not the feast are sung. At Prime (Ps. 117, 118i & 118ii) the lectio brevis is of the Sunday. At Mass there is a single collect and the last Gospel is In principio. Vespers are second Vespers of the Exaltation of the Cross without commemoration of the following Office of the Seven Sorrows or of the Sunday. At Compline Te lucis is sung with the ordinary Doxology. The Ember Days will not be celebrated for another week.

Icon from the Greek Catholic Church.
Posted by Rubricarius at 07:01

Pray tell why the Ember days will be observed a week off in 1962.

Because the 1962 rite cannot understand the traditional distinction between the first Sunday of the month and the first Sunday in the month. The esteemed Fr. Hunwicke has written an excellent post which mentions this.