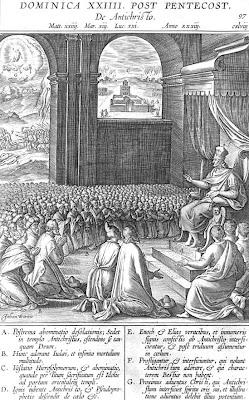 Today is the twenty-fourth, and last, Sunday after Pentecost. It is also the fifth Sunday of November. The liturgical colour is green. The Gospel pericopes from St. Matthew's Gospel contain the prophetic words of the LORD concerning the last days and the coming of the Antichrist.

[Customers are asked to forgive the 'typo' in the title of today's entry in Ordo MMXIV and to be assured that Ordo MMXV - available from later today - is a far superior production. Ordo MMXIV was produced in a great rush but considerably more time has been taken over next year's edition but more of that in a separate post.]

At Vespers yesterday afternoon the antiphons and psalms of Saturday were sung. The Office hymn was Jam sol recedit igneus. The antiphon on the Magnificat was Super muros tuos for the Saturday before the fifth Sunday of November. After the collect of the Sunday commemorations were sung of the preceding Office of St. Cecilia and then of St. Clement and of St. Felicitas. The Suffrage of the Saints was omitted due to the double feasts as were the Dominical preces at Compline.

At Mattins the invitatory is Adoremus Dominum etc and the Office hymn is Primo die. In the first nocturn the lessons are the Incipit of the Prophet Micheas. In the second nocturn the lessons are from St. Basil on the thirty-third psalm. In the third nocturn the homily is from St. Jerome on St. Matthew's Gospel. The Te Deum is sung. At Lauds the Office hymn is Aeterne rerum Conditor. After the collect of the Sunday commemorations are sung of St. Clement and of St. Felicitas. The Suffrage of the Saints is omitted.

At Prime (Pss. 117, 118i & 118ii) both Quicumque and the Dominical preces are omitted because of the occurring double feast.

Vespers are of the Sunday. The Office hymn is Lucis creator. After the collect of the Sunday commemorations are sung of the following Office of St. John of the Cross, of St. Clement and of St. Chrysogonus. The Suffrage of the Saints is omitted as are the Dominical preces at Compline due to the occurring and concurring double feasts.

Art: Jerome Nadal Nadal's image of the Antichrist enthroned whilst the clergy and people give him false worship.
Posted by Rubricarius at 08:01