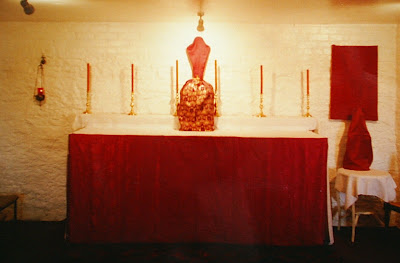 The English name for today, Mandy Thursday (the spelling with a 'u' is relatively modern) derives from one of the key features of the day, the Mandatum, or Washing of Feet. Mandy Thursday is rather composite in its structure with many elements coming together before the celebration of the LORD's Pascha. Mandy Thursday is a Double of the First Class.

Anciently, Mandy Thursday was the day when the public penitents, previously expelled from the church on Ash Wednesday, were reconciled. When there were multiple Masses this day the first was for the reconciliation of the penitents. The rite for reconciliation, in some ways a mirror image of the rite of expulsion in that the penitents were led back into church, can still be found in the Pontificale Romanum. Interestingly, this rite clearly, in somewhat reduced forms, continued until modern times. Perusing an Ordo for 1943 for the Diocese of Angers part of the entry for Mandy Thursday reads "In Ecclesia Cath. Post Nonam, Preces Quadragesimales seu absolutionis."
The photograph above was taken about 1993 and is of Dr. Glover's former chapel at Sacriston, Durham. The colour balance of the photograph has not worked too well, the antependium and veils were actually violet.

In the morning the Hours of Prime, Terce, Sext and None are chanted in aggregation. The choir altar remains vested as it was yesterday evening for Tenebrae with a violet antependium, lighted candles of unbleached wax and a violet veil on the Cross. The Little Hours take on a special and much simplified form during the Triduum in the Roman rite.

The choir enters the sanctuary, seniores ante inferiores, and kneels for Aperi, Domini then rises whilst a Pater noster, Ave Maria and Credo are said on the lips. The usual start of the Hours is omitted, as are antiphons, and Prime begins with the first verse of Psalm 53, Deus, in nomine tuo salvum me fac being intoned by the duty side cantor. The choir Signs itself at the opening words. The psalms are monotoned the verses taken by alternate sides of choir. Gloria Patri is not sung or said during the Triduum. After the last verse of Ps. 53 the choir continues, without break or intonation, with the first stanza of Ps. 118, Beati immaculati, and then with the second stanza Retribue. At the last verse a fall of a tone is made on the last syllable.

The choir kneels and Christus factus est recited as far as ad mortem. A Pater noster is then said by all and the Miserere monotoned in a subdued voice. Other than polyphonic settings that may be sung at Tenebrae the Miserere is never sung at the other Hours of the Triduum but always chanted as above. During the last verse of the Miserere again a fall of a tone is made on the last syllable. The Hebdomadarius then montones the collect Respice, falling a tone at the last syllable of tormentum and then the conclusion is said in silence.

The choir rises and says a Pater noster and Ave Maria on their lips. Terce then proceeds as Prime had done the choir Signing at Legem pone mihi. A fall of a tone is made at the end of the third stanza of Ps. 118 and everything repeated as at Prime: Christus factus est, Pater noster, Miserere and collect Respice. Sext and None follow in the same manner.

After None the choir rises and the Hebdomadarius and ministers for Mass go to the sacristy to vest. Meanwhile the choir altar is prepared for Mass. The unbleached candles are changed for ones of lighted bleached wax, a white antependium is laid over the violet one and a white veil placed over the altar Cross. 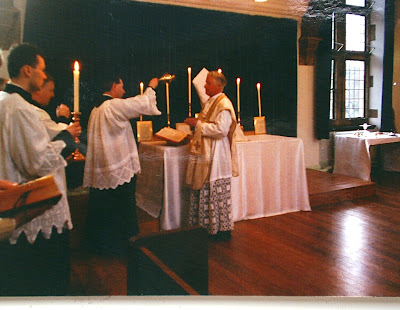 Mass is celebrated in white vestments. Today two Hosts are consecrated and thus placed on the paten before Mass. The organ may be played to the end of the Gloria in excelsis. The psalm Judica me is not said as the Mass is de Tempore. Gloria Patri is not sung at the introit, Nos autem, or at any of the other chants. As the Gloria in excelsis is sung may be rung. There is one collect. The Credo is sung. The preface is of the Cross, the Communicantes, Hanc igitur and Qui pridie are all proper in the Canon. The Agnus Dei is sung as usual but the Pax is not given.

When the celebrant has communicated he takes the second Host and places it in a second chalice. The deacon then covers this chalice with a pall then an upside down paten over which is placed a white silk veil which is then secured with a ribbon tied around the stem of the chalice. (If the celebrant is without a deacon the chalice is veiled but the ribbon not tied at this point as tying a ribbon with ones thumb and digit held together is not practical. In this case the tying takes place after the ablutions). Mass now proceeds following the rules coram Sanctissimo - basically no one turns their back to the Sacrament. Holy Communion is distibuted as normal following the Confiteor etc.

After the distribution of Communion Mass continues, Ite, missa est is the dismissal sung by the deacon and the blessing and last Gospel follow their normal course - with the coram Santissimo changes in ceremonial. The ministers reverence the altar at the end of Mass and go to the sedilia where they remove their maniples and the celebrant dons a white cope. The ministers return to the altar, prostrate and kneel on the lowest step. Incense is put on two thuribles but not blessed. The reserved Sacrament is censed. The celebrant is then given a white humeral veil and the deacon presents him with the veiled chalice. A procession is made to the altar of repose whilst Pange, lingua, gloriosi Corporis is sung. At the altar of repose a further censing takes place and the veiled chalice is placed inside the capsula. 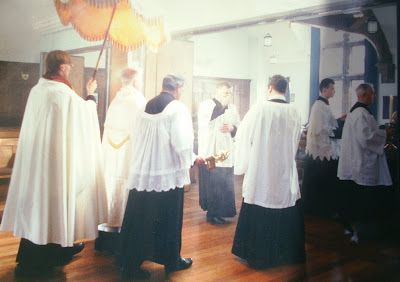 After due reverence to the Sacrament the ministers of the Mass return to the sacristy to take off their white vestments. However, the rest of the choir return to the choir altar. During the procession and ceremonies at the altar of repose the white veil is removed from the altar Cross, the white frontal removed and the candles exchanged for ones of lighted unbleached wax.

Vespers are begun at once and are again chanted to a monotone or sung where this is the custom. Vespers does have antiphons for today and tomorrow. After a Pater noster and Ave Maria the service starts with the first antiphon, Calicem salutaris. As this is intoned, the choir Signs itself. The antiphon is doubled and the psalm follows. If Vespers are not sung a drop of a tone is made at the end of the last verse of each psalm before the repitition of the antiphon. The psalms of Vespers today, and tomorrow, are Pss. 115, 119, 139, 140 & 141. After the last antiphon has been repeated Christus factus est etc is chanted to a monotone as at the Little Hours. During the Miserere a second priest in white stole removes the Sacrament from the tabernacle (if present) and takes it to the place - not the altar of repose - where it will be reserved until Holy Saturday. This Sacrament is used for sick calls during the Triduum and is not adored.

In Cathedral churches the Holy Oils are consecrated during this, single, Mass. The consecration of the Oils is, of course, associated with the initiation of those who were to be baptised on Holy Saturday and today is the last day the Eucharist is celebrated before the various anointings after baptism.

After Vespers the ministers of Mass return with the priest and deacon in vested in violet stoles. The celebrant of the Mass monotones the antiphon Diviserunt sibi which the choir continues followed by Psalm 21. The choir altar (and then other altars if present) are then stripped of cloths, frontal etc leaving only the veiled Cross and candlesticks. The candles and sanctuary lamp are extinguished. Lustral water is removed from the entrances to the church. The brethren retire for their collation.

The 'stripped' altar in the Union Debating Chamber appears below. As it consisted of a tressle table supported by chairs it was deemed better to have a base covering of black stuff. The compilator emeritus of the Ordo, the esteemed Mr. John Tyson, being a purist was most upset and said he would prefer to see a pile of chairs than any semblance of vesting! 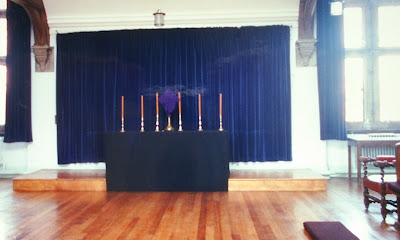 In the 'liturgical books of 1962' 'Tenebrae' so-called takes place in the morning outside Cathedral churches as noted in the previous post. In Cathedrals a Chrism Mass, created in 1956, takes place. Some of the texts appear to be committee work innovations. Part of the previous text for the consecration of the Chrism has been cut and pasted to create a preface for the new Mass. The last Gospel is not part of this new Mass. After its celebration a rubric in OHSI and MR1962 orders Sext and None to follow in choir. Vespers are completely omitted today by those attending the evening Mass. The mandatory evening Mass takes place where the tabernacle is empty to begin with. The Creed is omitted. Only one Host is consecrated along with a ciborium for Communion today and tomorrow. After the Gospel the Mandatum may take place and the feet of twelve men are washed, the celebrant versus populum for the collect. In the Mass the third petition of Agnus Dei is miserere nobis and the prayer Domine, Jesu Christi omitted. The Confiteor and absolution before Communion is suppressed for the first time, later of course abrogated throughout the whole year except on Good Friday, Benedicamus Domino replaces Ite, missa est, there is no blessing and the last Gospel omitted. Watching at the altar of repose ceases at midnight. At Compline the collect Respice is replaced by Visita quaesumus.c
Posted by Rubricarius at 07:01