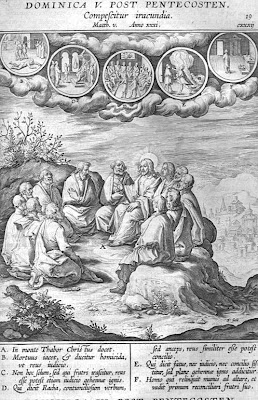 The fifth Sunday after Pentecost is of semi-double rite and its liturgical colour is green. This year the Vigil of SS Peter and Paul was anticipated yesterday, the fourth day within the Octave of St. John the Baptist.

At Vespers yesterday afternoon the antiphons and psalms of Saturday were sung. The Office hymn was Jam sol recedit igneus. After the collect of the Sunday commemorations were sung of the preceding Office of within the Octave of St. John the Baptist and of St. Irenaeus. The Suffrage was omitted as were the Dominical preces at Compline.

At Mattins the invitatory is Dominum qui fecit nos and the Office hymn isNocte surgentes. In the first nocturn the lessons are the Incipit of the Second Book of the Kings. In the second nocturn the lessons are taken from St. Gregory the Great's Book on Morals. In the third nocturn the homily on St. Matthew's Gospel is from St. Augustine. The Te Deum is sung. At Lauds the Office hymn is Ecce jam noctis. After the collect of the Sunday commemorations are sung of St. Irenaeus and of the Octave of St. John the Baptist. The Suffrage is omitted.

At Vespers there is a colour change to red and first Vespers of SS Peter and Paul are sung. The antiphons Petrus et Joannes etc are sung, doubled, with Pss. 109, 110, 111, 112 & 116. The Office hymn is Decora lux. After the collect of the feast a commemoration of the Sunday is sung. The Suffrage is omitted as are the Dominical preces at Compline.

In the 'liturgical books of 1962' the Vigil of SS Peter and Paul is omitted this year. The Octave of St. John the Baptist has been abolished (and also the Octave of SS Peter and Paul). There are no commemorations at either Vespers. Mattins is cut down to a single nocturn of three lessons. There are no commemorations at Lauds. Mass has a single collect.