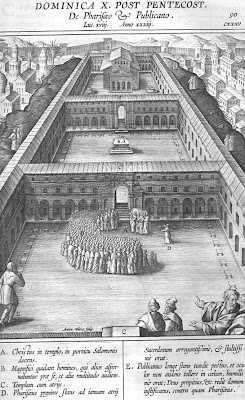 The tenth Sunday after Pentecost is of semi-double rite and its liturgical colour is green. This year it is the first Sunday of August. From this Sunday the first and second nocturn readings are no longer taken from the respective Sundays after Pentecost but are from the Sundays of August and following months until Advent.

At Vespers yesterday afternoon the antiphons and psalms of Saturday were sung. The Office hymn was Jam sol recedit igneus. The antiphon on the Magnificat was Sapientia for the Saturday before the first Sunday of August. After the collect of the Sundaycommemorations were sung of the preceding feast of St. Peter's Chains, St. Paul the Apostle, St. Alphonsus and of St. Stephen. The Suffrage was omitted as were the Dominical preces at Compline.

At Vespers (Pss. 109, 110, 111, 112 & 113) the Office hymn is Lucis creator. After the collect of the Sunday commemorations are sung of the following Office of the Finding of the Body of St. Stephen the Protomartyr and of St. Alphonsus. The Suffrage is omitted as are the Dominical preces at Compline.

In the liturgical books of the 1960s there are no commemorations at either Vespers. Mattins is cut down to a single nocturn of three lessons. At Lauds there are neither commemoration nor Suffrage. At Prime both Quicumque and the Dominical preces are always omitted. At Mass there is a single collect.