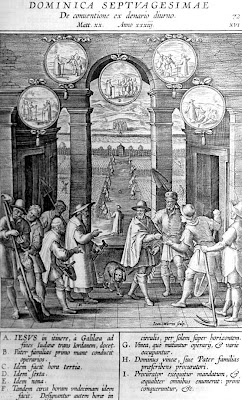 Septuagesima Sunday is a semi-double Sunday of the second class. Yesterday afternoon the liturgical mood became more sombre with Vespers of Septuagesima as penitential violet became the liturgical colour of the season. Although more sombre than the season after the Epiphany the short season of Septuagesima is not as penitential as Lent. Although the colour violet is used at Mass the ministers do not wear folded chasubles but dalmatic and tunicle for these three Sundays and for ferial days. The organ is still played until Ash Wednesday. However, from Septuagesima until Holy Saturday the dress of some prelates changes. Cardinals of the Court of Rome no longer wear scarlet choir dress but that of violet. Correspondingly bishops do not wear violet choir dress but their black, or mourning dress. In the case of the latter this is not to be confused with their habitus pianus, or house dress. The black choir cassock has a train, like the violet one, and the mozzeta or mantelletum are faced with violet. However, Protonotaries Apostolic and Domestic Prelates do not change their choir dress (except sede vacante). Yesterday the third Sunday after the Epiphany was anticipated.

At Vespers on Saturday afternoon the antiphons and psalms of Saturday were sung. The chapter was proper to Septuagesima Sunday and the Office hymn was Jam sol recedit igneus. After the collect of the Sunday commemorations were sung of St. Timothy and of St. Raymund de Pennafort (but not of the anticipated third Sunday after the Epiphany). The Suffrage was omitted. At the end of Vespers Alleluia was added, twice, to both Benedicamus Domino and to its response. After that Alleluia will not be heard again until the Vesperal Liturgy of Holy Saturday. At Compline after the Lesser Doxology, and at all Hours until Compline on Holy Saturday, Laus tibi Domine Rex aeterne gloriae is sung in place of Alleluia. The Dominical preces were sung at Compline.

At Lauds the 'second scheme' of psalms is sung: Pss 50, 117, 62, Canticle of the Three Children (Benedictus es) and 148. The antiphons at Lauds are proper to the Sunday as are the versicle after the hymn Aeterne, chapter, antiphon at the Benedictus and collect. After the collect of the Sunday a commemoration of St. Timothy is sung. The Suffrage is omitted.

At Mass the Gloria is omitted. The ministers wear violet dalmatic and tunicle. The second collect is of St. Timothy. Today there is no third collect. A Tract replaces the Alleluia after the Gradual, the Credo is sung and the Preface is of the Blessed Trinity. Benedicamus Domino is sung, by the deacon facing the altar, as the dismissal.

At Vespers the antiphons and psalms of Sunday are sung. The Office hymn is Lucis creator. After the collect of the Sunday commemorations are sung of the following feast of the Conversion of St. Paul, of St. Peter the Apostle and of St. Timothy. The Suffrage is omitted as are the Dominical preces at Compline.

In the 'liturgical books of 1962' there are no anticipated Sundays. At Vespers there were no commemorations. Mattins is reduced to a single nocturn. At Prime the arrangement of psalms is truly bizarre with the festal arrangment of Pss. 53, 118i, 118ii (!) At Mass there is only one collect and Benedicamus Domino is suppressed in favour of Ite, missa est. At Vespers there are no commemorations.