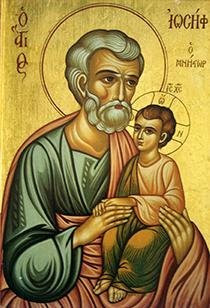 The feast of the Solemnity of St. Joseph Spouse of the Blessed Virgin and Patron of the Universal Church is a Double of the First class with an Octave. It is the primary feast of St. Joseph. The feast was introduced into the Universal Kalendar by Pius IX in 1847 as the 'Patronage of St. Joseph' as a double of the second class to be celebrated on the third Sunday after Easter. In 1870 the feast was raised to a double of the first class and given an octave with 'Patron of the Church' added. In 1911 the feast was renamed the Solemnity of St. Joseph and became a primary double of the first class. In 1913 the celebration was moved to the Wednesday after the second Sunday after Easter. Although relatively modern the feast is a fine example of typology with the Patriarch Joseph being used as a 'type' of the foster-father of the LORD.

At second Vespers the antiphons, psalms and hymn are those that were sung yesterday at first Vespers. The Office hymn is Te Joseph. The versicle and its respond along with the antiphon on the Magnificat are proper to second Vespers. After the collect of the feast a commemoration is sung of the following Office of St. Justin. At Compline the Dominical psalms are sung.

In the 'liturgical books of 1962' the Solemnity of St. Joseph simply does not exist as this beautiful feast was shamefully suppressed in 1956 to be replaced by the appalling 'San Giuseppe Comunista'. Today the feast of St. Hermenegild is celebrated as III class. The vast majority of 'traditionalists', who vociferously support the 'liturgical books of 1962', are completely and blissfully unaware of the existence of the Solemnity of St. Joseph yet alone its abolition. A few who are aware of it substitute the Office of the feast for the execrable Joe the Worker travesty on May 1st.

In response to an enquiry readers without access to a traditional Breviary and Missal may find the two photographs below, of the title page of the feast in both books, of interest: 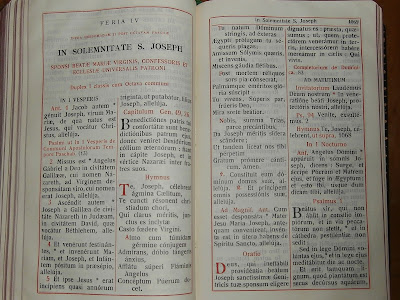 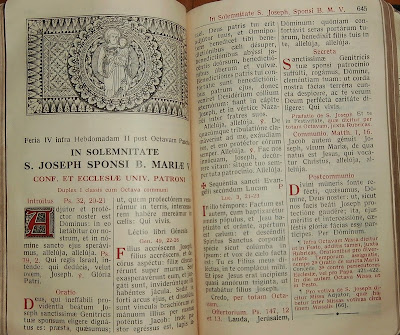