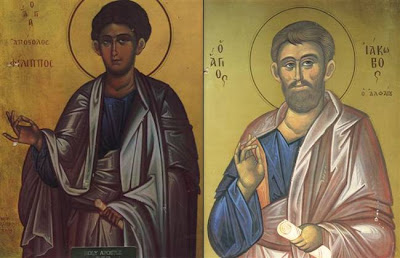 The feast of the Holy Apostles SS Philip and James is a Double of the Second Class and its liturgical colour is red. The feast takes precedence over the fifth Sunday after Pascha which is commemorated in the Office and at Mass. In Western rites SS Philip and James have been honoured together as the relics of both Apostles were placed together in the confessio of the Church of the Apostles in Rome at its consecration in the sixth century. The anniversary of this, the church's dedication in 560, is May 1st and so the feast of two Apostles has graced this day in Western Kalendars for nearly 1500 years. St. Philip, tradition tells us, was from Bethsaida. He was crucified at Hierapolis in Phrygia. St. James the Less was from Cana and was the first bishop of Jerusalem. St. Paul says (Galatians 1:19) 'I did not see any apostle except James the brother of the Lord'. St. James was cast from the pediment of the Temple on the orders of the Jewish High Priest and then clubbed to death.

The feast began with first Vespers yesterday afternoon. The antiphons were proper to the feast, Domine, ostende nobis Patrem etc, sung with psalms 109, 110, 111, 112 & 116. The chapter was Stabant justi and the Office hymn Tristes erant Apostoli. The the antiphon on the Magnificat, Non turbetur etc., and collect are are proper to the feast. After the collect of the feast a commemoration was sung of the preceding Office of St. Catherine of Siena and of the Sunday. At Compline Te lucis was sung with the Paschaltide Doxology and the Dominical preces were omitted.

At Mattins there are the usual three nocturns. The invitatory is Regem Apostolorum Dominum Venite adoremus, the antiphons Stabunt justi etc and the Psalms are from the Common of Apostles. In the first nocturn the lessons are the Incipit of letter of St. James from the fourth Sunday after Easter. These lessons are followed by the responsories from the Common, Beatus vir, qui metuit Dominum, alleluia etc. In the second nocturn the lessons are proper to the feast. The Gospel in the third nocturn is from St. John and the pericope contains the passage where the LORD tells St. Philip that if he wishes to see the Father to see Him and that in the Father's house there are many mansions. The ninth lesson is of the Sunday. The Te Deum is sung.

At Lauds the antiphons Domine ostende nobis Patrem etc are sung with psalms 92, 99, 62, Benedicite & 148. The Office hymn is Paschale mundo gaudium and is sung with the Paschal Doxology. After the collect of the feast a commemoration of the Sunday is sung. At the Hours the same antiphons are sung in the usual sequence. The Office hymns have the Paschal Doxology and the feastal psalms are sung at the Hours. At Prime the lectio brevis is Scimus quoniam.

At second Vespers the antiphons Domine ostende nobis Patrem are sung again this time with psalms 109, 112, 115, 125 & 138. The Office hymn is Tristes erant Apostoli. After the collect of the feast commemorations are sung of the following Office of St. Athanasius and of the Sunday.

The 'liturgical books of 1962' plummet to a nadir today as the ancient feast of SS Philip and James has been cast aside until May 11th, the first 'free' liturgical day, and May 1st becomes the repugnant 'Joe the Worker' day. Pacelli's Commission for General Liturgical Reform had discussed making May 1st a Marian feast but settled on S. Giuseppe Artigiano (c.f. minutes of meeting 45; 19 Oct 1954 and 59; 17 Jan 1956 in Giampietro, N., 'Il Card. Ferdinado Antonelli e gli sviluppi della riforma liturgica dal 1948 al 1970', Studia Anselmiana, Rome, 1998). Clearly feasts of antiquity were not considered particularly sacred - but then neither was anything else - so from 1956 the beautiful, albeit relatively modern, feast of the Solemnity of St. Joseph and its Octave were abolished and today's venerable and ancient feast of the Holy Apostles swept aside to May 11th. The Office of 'Joe the Worker' is truly appalling with lessons about multitudes of working men gathering in St. Peter's Square: '...cum occasionem nactus opificum conventus Kalendis maiis...Romae celebrati, ingentum multitudinem in foro ad sancti Petri Basilicam...'

I had never thought to look at the readings Ad Matutinum for 1 May in the 1960 Office.

Now I wish I hadn't.

They are rather grim to say the least!