Visitation of the BVM 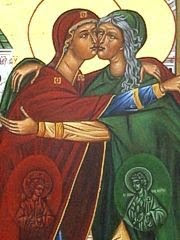 The feast of the Visitation of the BVM is a Double of the Second Class and its liturgical colour is white. The feast commemorates the Visitation made by the BVM to her cousin Elizabeth (c.f. Luke 1: 39-80). The feast originated as a concession to the Franciscans at the request of St. Bonaventure in 1263. Urban VI in 1389 confirmed the celebration of the feast with an Octave on July 2nd. Boniface IX in 1390, the Council of Basle in 1441 and Nicholas V in 1451 confirmed the feast but not the Octave, according to the notes of the Pian Commission. In the 1550 Breviary it became a double feast as it also appeared in the Tridentine Breviary, with a partially new Office in 1569. Clement VIII made the feast a greater double in the 1604 BR and Pius IX made it a double of the second class in 1850. The modern reformers couldn't cope with the feast on the day following the Octave Day of the Nativity of St. John the Baptist finding this illogical and so moved it to 31st May. The Byzantines keep the feast, which was only introduced in the nineteenth century, on March 30th.

At Prime and the Hours the hymns are sung to the melody of the Incarnation and with its Doxology. The antiphons from Lauds are sung with the Sunday psalms. At Prime the festal psalms (53, 118i & 118ii) are sung, in the short responsory the versicle Qui natus es is sung, the lectio brevis is In plateis.

At Vespers the antiphons Exsurgens Maria etc are sung with the psalms from the Common of the BVM, Pss. 109, 112, 121, 126 & 147. The Office hymn is Ave, maris stella. After the collect of the feast a commemoration is sung of the seventh Sunday after Pentecost and of St. Leo. The Suffrage is omitted. At Compline Te lucis is sung with the Doxology and melody of the Incarnation and the Dominical preces are omitted.

In the 'liturgial books of 1962' at Mattins the ninth lesson of SS Processus and Martinian is suppressed. At the Hours the ferial antiphons and psalms are sung, the hymns do not have the Doxology of the Incarnation. At Prime the short lesson is of the season. At Vespers there is no commemoration of St. Leo.
Posted by Rubricarius at 07:01

In addition to the rubrical notes, I particularly enjoy the historical notes on how the feast was introduced and how it developed. Thanks for keeping this blog!