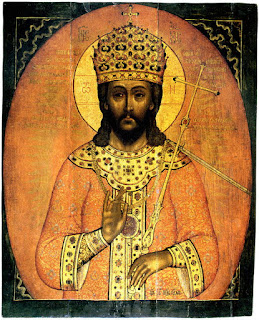 The feast of Christ the King is a Double of the First Class and its liturgical colour is white. This year it is also the twenty-fourth Sunday after Pentecost and the first Sunday of November. The texts used to commemorate the Sunday do not come from those given in the Breviary and Missal for the twenty-fourth and last Sunday after Pentecost but are those from the fourth Sunday after the Epiphany. The Sundays after the Epiphany that were not celebrated before Septuagesima, this year the fourth, fifth and sixth, are used, with slight adaptation, for those Sundays after the twenty-third and before the last Sunday before Advent.

At Mattins the invitatory is Jesum Christum, Regem regum Venite adoremus. In the first nocturn (Pss.2, 8 & 23) the lessons are taken from St. Paul's Epistle to the Colossians. In the second nocturn (Pss. 28, 44 & 46) the lessons are taken from Pius XI's encyclical Quas primas. In the third nocturn (Pss. 71, 88i, 88ii) the homily on St. John's Gospel is taken from the writings of St. Augustine. The ninth lesson is the homily appointed for the twenty-fourth Sunday after Pentecost, from St. Jerome on St. Matthew (appointed for the fourth Sunday after the Epiphany). The Te Deum is sung. At Lauds the antiphons Suscitabit etc are sung with the Sunday psalms. The Office hymn is Vexilla Christus inclyta. After the collect of the feast a commemoration is sung of the Sunday.

At Prime and the Hours the antiphons Suscitabit etc are sung with the festal psalms (at Prime Pss. 53, 118i & 118ii). The Doxology Jesu, tibi sit gloria etc is sung with the hymns of the Hours. At Prime the versicle in the short responsory is Qui primatum in omnibus tenes and the lectio brevis In ipso.

Mass is sung after Terce. The Gloria is sung, the second collect is of the Sunday, the Creed is sung. The preface is proper to the feast and the last Gospel is that of the Sunday.

At Vespers all is sung as yesterday at first Vespers except the versicle & response and the antiphon on the Magnificat which are proper to second Vespers. After the collect of the feast a commemoration is sung of the Sunday.

Surely next Sunday is the first Sunday of November?

If next Sunday had fallen a day earlier, i.e. if it were the 5th and not the 6th November then it would be the II Sunday of November - a rarity.