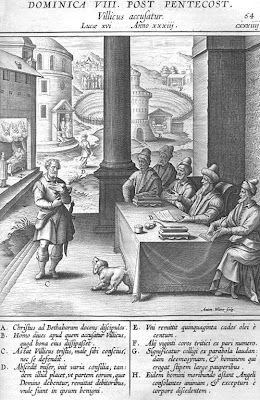 The eighth Sunday after Pentecost is of semi-double rite and its liturgical colour is green. This year it is the first Sunday of August. The Gospel pericopes from St. Luke contain the parable about the unjust steward.

At Vespers yesterday afternoon the antiphons and psalms of Saturday were sung. The Office hymn was Jam sol recedit igneus. The antiphon on the Magnificat was Sapientia for the Saturday before the first Sunday of August. After the collect of the Sunday commemorations were sung of the preceding feast of St. Martha and of SS Abdon & Sennen followed by the Suffrage of the Saints. At Compline the Dominical preces were sung.

At Mattins the invitatory is Dominum qui fecit nos and the Office hymn isNocte surgentes. In the first nocturn the lessons are the Incipiunt of the Proverbs of Solomon. In the second nocturn the lessons are taken from a tract of St. Ambrose on the 118th Psalm. In the third nocturn the homily on St. Luke's Gospel is from St. Jerome. The Te Deum is sung. At Lauds, after the collect of the Sunday, a commemoration is sung of SS Abdon & Sennen followed by the Suffrage of the Saints.

Mass is sung after Terce. The Gloria is sung, the second collect is of the SS Abdon & Sennen, the third collect is A cunctis. The Creed is sung and the preface is of the Blessed Trinity.

Vespers are of the Sunday (Pss. 109, 110, 111, 112 & 113) and the Office hymn is Lucis creator. After the collect of the Sunday a commemoration is sung of the following feast of St. Ignatius. At Compline the Dominical preces are omitted.

Why do some Catholics say that kneeling after the Sanctus until the Ite Missa Est is wrong?
Even in my 1969 novus ordo missal upbringing we did every Sunday & Holy Day.
Should we stand during Pater Noster untill Domine non sum dignus?