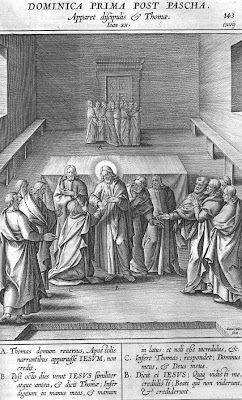 Dominica in Albis, Low Sunday is a Greater-double of the first class. The Sunday is also often referred to as Quasimodo from the first words of its introit. Anciently on this day those who had been baptised on Holy Saturday took off their white robes which had been worn since the Oil of Catechumens and Chrism had been lavished upon them on Holy Saturday. The Gospel at Mattins and Mass is the account of the LORD appearing in to His disciples behind the shut doors of the room and the doubting of St. Thomas. The Office of the Octave of Pascha ended with the Office of None yesterday.

At Vespers yesterday afternoon the psalms of Saturday were sung under the single antiphon, Alleluia. Chapters and hymns return to the Office from this Vespers. The Paschaltide hymn Ad regias Agni dapes was sung. Its Doxology is sung at all hymns of Iambic metre: Deo Patri sit gloria, Et Filio qui a mortuis, Surrexit ac Paraclito, In sempiterna saecula until the Ascension. After the collect of the Sunday commemorations were sung of St. Paul of the Cross, St. Peter Canisius and of St. Vitalis of St. From this Office the dismissal, Benedicamus Domino, is sung without the double Alleluia that marked the Paschal Octave. At Compline the Dominical preces were omitted.

Mass is sung after Terce. The Gloria is sung. The second collect is of St. Paul of the Cross, the third collect is of St. Vitalis. (If today there were no occurring Offices there would be a single collect at Mass). The Creed is sung, the preface is of Paschaltide (In hoc potissimum).

At Vespers there is a colour change to red and first Vespers of the transferred feast of St. Mark are sung. The antiphons Sancti tui etc are sung, doubled, with psalms 109, 110, 111, 112 & 116. The chapter is Stabunt justi and the Office hymn is Tristes erant Apostoli. After the collect of the feast commemorations are sung of the Sunday, St. Paul of the Cross and of St. Peter the Martyr. At Compline the Dominical preces are omitted.

(In English dioceses Vespers are first Vespers of the transferred feast of St. George with a commemoration of the Sunday. The feast of St. Mark is celebrated on Tuesday).

In the 'liturgical books of 1962' Mattins is reduced to a single nocturn of three lessons with the single antiphon Alleluia, lapis revolutus etc. At the Little Hours the Paschaltide Doxology is not sung with the hymns. At Mass there is a change to one word in the introit as 'rationabile' replaced 'rationabiles' in the 1953 edition of the Roman Missal and subsequent editions. Vespers are of the Sunday without any commemorations. At Compline the ordinary Doxology and tone are sung with Te lucis.