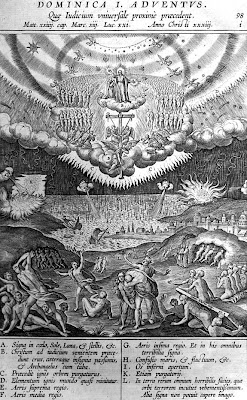 The first Sunday of Advent is a semi-double Sunday of the first class and its liturgical colour, from Mattins, is violet. The liturgy of Advent is perhaps the most exquisite of the entire liturgical year with 'layers' of meaning for both the First and Second Comings of the LORD. There is a weave of expectant joy and penance to be found throughout the liturgical texts. The eschatalogical theme of last Sunday's Gospel continues with St. Luke's Gospel today and the Coming of the Divine Judge. In the Breviary Vespers of Advent Sunday mark the beginning of the Pars Hiemalis.

During Advent bishops of the Roman rite exchange their violet choir cassocks for black ones (with train) which are worn with either a black mozzeta or black mattelletum with violet linings. Cardinals of the Court of Rome wear their 'winter' violet merino apparel (in contrast to their summer mourning dress of violet watered-silk) in place of their scarlet watered-silk.

Yesterday afternoon second Vespers of the feast of St. Andrew were sung. The antiphons Salve, crux pretiosa etc were sung, doubled, with psalms 109, 112, 115, 125 & 138. The Office hymn was Exsultet orbis gaudiis. After the collect of the feast a commemoration was sung of the Sunday. The Suffrage was omitted due to the double feast and is omitted for the entirety of Advent. From this Vespers, until the end of None on the Vigil of the Nativity of the LORD, Alma Redemptoris is sung. At Compline the Dominical preces were sung.

At Mattins there is a colour change to violet and the invitatory is Regem venturum and this is sung in both the Dominical and ferial Offices of Advent until the third Sunday. The Office hymn is Verbum supernum. In the first nocturn the antiphons Veniet ecce Rex etc are sung, not doubled, with the usual psalms for Sunday. In the first nocturn the lessons are the Incipit of the prophet Isaiah. In the second nocturn the antiphons Gaude et laetare etc are sung and the lessons are taken from the writing of St. Leo on the fast of the tenth month, the theme of which is preparing for the Coming. In the third nocturn the antiphons Gabriel Angelus etc are sung and the homily is from St. Gregory continuing the theme of Coming with his commentary on St. Luke's Gospel about the end times. A ninth responsory is sung and the Te Deum is omitted in the Office of Advent. At Lauds the antiphons proper to the first Sunday In illa die etc, are sung, not doubled, with the Dominical psalms. The Office hymn is En clara vox. The Suffrage is omitted, as noted, during Advent.

Mass is sung after Terce. During Advent for ferial and Dominical Masses in the Roman rite, with the exception of the third Sunday Gaudete, the deacon and sub-deacon do not wear the dalmatic and tunicle but violet folded chasubles, an ancient feature of the Roman liturgy. The Gloria in not sung, the second collect is Deus, qui de beatae, the third collect is Ecclesiae etc. The Creed is sung, the preface that of the Blessed Trinity and, as the Gloria was not sung, the dismissal is Benedicamus Domino, sung by the deacon facing the altar, not turned towards the people.

At Vespers the antiphons In illa die etc are sung with the Dominical psalms. The Office hymn is Creator alme siderum. After the collect of the Sunday commemoration are sung of the following Office of St. Bibiana. At Compline the Dominical preces are sung.

In the 'liturgical books of 1962' Vespers were of the Sunday without any commemoration of St. Andrew (whose feast does not get Vespers at all this year). Mattins is cut down to a single nocturn of three lessons. At Prime there are no Dominical preces. At Mass the there is the novelty for the the Roman rite of the deacon wearing the dalmatic and the sub-deacon the tunicle in a penitential Mass of the season. Folded chasubles, so ancient and so quintessentially Roman, have been cast aside. There is only one collect and the dismissal is Ite, missa est. At Vespers there are no commemoration and at Compline the Dominical preces are omitted.