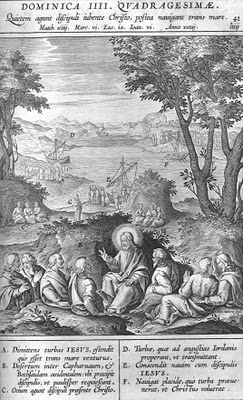 At Vespers yesterday morning the antiphons and psalms of Saturday were sung. The Office hymn was Audi benigne conditor. After the collect of the Sunday a commemoration was sung of the preceding Office of St. Benedict. The Suffrage of the Saints was omitted as were the Dominical preces at Compline.

At Mattins the invitatory is, as on the previous Sundays of Lent, Non sit vobis and the Office hymn is Ex more. The antiphons given in the Psalter for Sundays are sung. In the first nocturn the lessons are from Exodus and the story of Moses and the Burning Bush. In the second nocturn the lessons are from the writings of St. Basil the Great on fasting and in the third nocturn the lessons are a homily of St. Augustine on St. John's Gospel. At Lauds the antiphons, Tunc acceptabis etc., are proper to the Sunday and the second scheme of Psalms sung (50, 117, 62, the canticle Benedictus es, 148). The chapter is proper to the Sunday and hymn is O sol salutis. After the collect of the Sunday the Suffrage of the Saints is sung.

Mass is sung after Terce. The Gloria is not sung. The second collect is A cunctis, the third collect Omnipotens. A Tract is sung after the Gradual, the Credo is sung, the preface is of Lent and the dismissal is Benedicamus Domino, sung by the deacon facing the celebrant and altar. As folded chasubles are not worn the organ may be played. As noted above violet vestments may be used in the absence of rose, or in preference to it, in which case the deacon and subdeacon wear the dalmatic and tunicle not folded chasubles.

In the 'liturgical books of 1962' Vespers yesterday were sung at the same time as outside of Lent. There are no commemorations nor Suffrage at Vespers. Mattins is cut down to a single nocturn of three lessons. At Lauds the Suffrage is omitted. At Prime the psalms are 53 and the first two divisi of Ps. 118. The preces are omitted. At Mass there is only a single collect. The dismissal is Ite, missa est.

What was official reason given in 1962 for changing the dismissal at the Holy Sacrifice of the Mass?
Even if a Priest offers the 62
Missale Romanum,he should stick with
Benedicamus Domino.
-Andrew

The theory was that Benedicamus Domino was said when some other function, e.g. a procession followed and Ite, Missa est otherwise.