St. John the Apostle and Evangelist 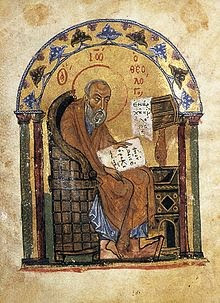 The feast of St. John the Apostle and Evangelist is a Double of the Second Class with, since the reform of 1911-13, a simple Octave. Before that reform the feast had a common Octave. The liturgical colour of the feast is white. The feast completely displaces the Sunday within the Octave of the Nativity.

At the Hours the hymns are sung with the Doxology of the Incarnation. At Prime the antiphon Valde honorandus est is sung with the festal psalms (53, 118i & 118ii) and the lectio brevis is In medio Ecclesiae. The antiphons from Lauds are sung in due order at the other Horae Minores.

Vespers are of the Nativity but from the chapter of St. John. The Office hymn, Exsultet orbis gaudiis, is sung with the Doxology of the Incarnation. Commemorations are sung of tomorrow's feast of the Holy Innocents and of the Octave of the Nativity.
At Compline the Dominical psalms are sung and the Dominical preces are omitted.
Following the 'liturgical books of 1962' today is the Sunday within the Octave of the Nativity (although no commemoration of the Octave is made). Mattins (of the Sunday) is cut down to a single nocturn of three lessons. The Doxology in honour of the Incarnation is omitted in the singing of the Office hymns of the Little Hours. At the Little Hours the antiphons and psalms are taken from the psalter for Sunday, not from the feast. At Prime the lectio brevis is of the season. St. John gets commemorated at Lauds and in said Masses. At other Masses there is a single collect. At Vespers no commemoration is made of the Holy Innocents nor of St. John or the Octave of the Nativity.

Miniature of St. John from Wikipedia.
Posted by Rubricarius at 01:00

Merry Christmas. In England, before the Pius X reform, what rank did St. Thomas of Canterbury have? Would he have had second Vespers a capitulo with a commemoration of the Sunday instead of the other way round?
On your Christmas post you mentioned that the '62 books don't use the tone for the Nativity: the Liber still prints some of the proper tones, including that for the Nativity, and I've heard them used in many places by rubrically minded priests. Were they formally suppressed as the doxologies were?

On December 29 (outside of England, of course, where St Thomas Becket is d2cl), should the antiphons for the Psalmody of Vespers be doubled or not? From the Chapter onward, it is the resumed Sunday within the Octave (semidouble), but does one consider that the psalms belong rather to the (double) office of St. Thomas?

I meant to say of course that St. Thomas is d1cl in England. Merry Christmas!

In England St. Thomas was a D1Cl with Octave.

In my 1962 Liber Usualis in the prefatory section detailing the changes to the Office it states "Season of the Nativity until Jan. 5 at None: the melody for Compline, p. 367 and Terce, p. 407, will still be used, but with the common doxologies: at Prime Deo Patri sit gloria, at the other Hours, Praesta, Pater piissime, no longer the melody of the hynm of Christmas Vespers."

Thank you for your reply. Assuming we have the same edition of the Liber, the hymn tone on the pages you refer to is the proper tone of the Nativity. There used to be an option of using the Vespers tone instead at Compline, so the instruction to no longer use that melody doesn't seem to be forbidding the proper tone for the Nativity.
In Domino,

The link between tone and Doxology is broken by the changes. I agree that the Nativity tone is used. My understanding was that the Doxology indicated the tone.