Anticipated Fourth Sunday after the Epiphany 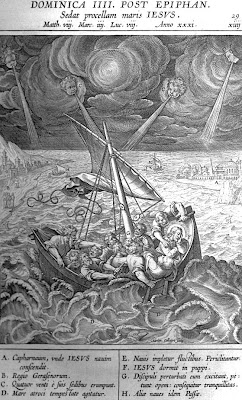 Today is the anticipated fourth Sunday after the Epiphany. The Sunday is of semi-double rite and the liturgical colour is green. The Sunday follows the usual rules for Sundays in occurrence and concurrence.

At Vespers yesterday afternoon the antiphons and psalms were of Friday. The Office hymn was that appointed for Friday Hominis superne Conditor. After the collect of the Sunday commemorations were sung of the preceding feast of St. Francis de Sales and of St. Martina. The Suffrages were omitted as were the Dominical preces at Compline.

At Lauds the antiphons, psalms, chapter and hymn are from the Psalter for Saturday. The antiphon on the Benedictus and collect are proper to the Sunday. After the collect of the Sunday a commemoration is sung of St. Martina followed by the Suffrage of the Saints. At Prime the chapter is Regi saeculorum. The Dominical preces are sung.

At the other Hours the antiphons and psalms are of the Saturday, the collect is of the Sunday. Mass is sung after Terce as normal for Sundays. At Mass the Gloria is sung, the second collect is of St. Martina, the third collect is Deus, qui saltutis. The Creed is sung and the preface is of the Blessed Trinity.

At Vespers the liturgical mood and colour change. The altar is vested in violet and Vespers are of Septuagesima. After the collect of Septuagesima Sunday (the Office of the anticipated Sunday ceases after None) commemorations are sung of St. John Bosco and of St. Martina. The Suffrage is omitted due to the occurring double feast. Alleluia is added, twice, to both Benedicamus Domino and to its response. After that Alleluia will not be heard until the Vesperal Liturgy of Holy Saturday. At Compline the Dominical preces are omitted.

In the 'liturgical books of 1962' anticipated Sundays have been abolished. Today is the III class feast of St. Martina. The formerly semi-double feast is stripped down to a single nocturn. At Vespers of Septuagesima there are no commemorations.