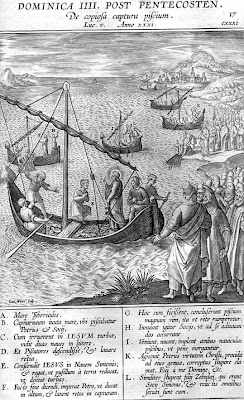 At Vespers yesterday afternoon the antiphons and psalms of Saturday were sung. The chapter was O altitudo and the Office hymn was Jam sol recedit igneus. This chapter and hymn are used now on all of the 'green' Sundays after Pentecost. After the collect of the Sunday commemorations were sung of the preceding feast of St. Juliana Falconieri and of St. Silverius. The Suffrage of the Saints was omitted as were the Dominical preces at Compline.

At Mattins the invitatory is Dominum qui fecit nos and the 'summer' Office hymn is Nocte surgentes. In the first nocturn the lessons are taken from the First Book of Kings. In the second nocturn the lessons are from a sermon of St. Augustine and in the third nocturn the homily is from St. Ambrose on the Gospel account from St. Luke on the huge catch of fish at the lake of Genesareth. At Lauds the Office hymn is Ecce jam noctis. After the collect of the Sunday commemoration is sung of St. Silverius followed by the Suffrage of the Saints.

At Prime both Quicumque and the Dominical preces are sung.

Mass is sung after Terce. The Gloria is sung, the second collect is of St. Silverius, the third collect is A cunctis. The Creed is sung and the preface is of the Blessed Trinity.

At Vespers (Pss. 109, 110, 111, 112 & 113) the Office hymn is Lucis creator. After the collect of the Sunday a commemoration is sung of the following feast of St. Aloysius Gonzaga. The Suffrage of the Saints is omitted as are the Dominical preces at Compline.