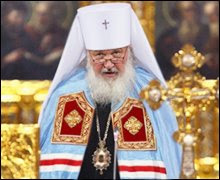 Congratulations to HH Patriarch Kyrill of Moscow and All Russia who was elected to the Patriarchate this evening.

Of the various Eastern Churches the Russian Orthodox Church appears to have the most interest in liturgical matters. Of course the Russian Church learnt the bitter consequences of artificial liturgical reform in the seventeenth century. Patriarch Nikon basically decided that the Russian service books had been corrupted as they were at variance with the contemporary Greek ones. In reality the Russian books were more traditional and the Greek ones had been revised. Nikon imposed the Greek books and was met with fierce resistance. There are strong parallels with reform of the Roman liturgy in the twentieth century except the Russian resistance was more dramatic with people even being martyred in defence of the old books. Some of the differences between the books have been explored by Paul Meyendorff in 'Russia, Ritual and Reform'. Overall the relationship between the pre-Nikonian books and the revised ones has a strong reflection in the differences between the Sarum missal and the Roman ones of 1474 and 1570.

Thankfully, with the unification of the Moscow Patriarchate and the Russian Church Outside of Russia, some 'Old Believer' parishes and a bishop coexist in harmony with users of the 'modern' books and indeed even some Western Rite parishes using the Sarum liturgy all under the omphorion of Patriarch Kyrill.

Patriarch Kyrill is, I understand on good authority, a fan of English Real Ale.
Posted by Rubricarius at 19:59

Ad multos annos! I first heard of this moments ago from a friend of mine who is a Russian Orthodox. I don't know anything about the new Patriarch myself but his willingness to invite the Holy Father to Russia is a good sign, a very good sign. Us Westerners can learn a lot from our separated Eastern brethren in terms of liturgy and devotion - they have held their rich liturgical tradition with a grip a lot harder than we have.

In terms of biography Kyrill Goondyaev (in my amateur transliteration) was born in 1946 in St. Petersberg. He was consecrated in 1976 and made Metropolitan of Smolensk in 1984. His previous role was head of the Department of External Church Relations (DECR) which has brought him into contact with other ecclesial and political leaders.

My understanding, as per my post, is that he has said the policy with regard to Rome will not change from that under his predecessor.

I was just wondering why the original post and the two responses to it are so happy about the election of this Bishop in a schismatic sect. I know very little about the Orthodox sects, or even Eastern Rite Catholics or liturgies in general, so maybe I'm missing something. However, the Orthodox are still schismatic and still refuse communion with the Vicar of Our Lord Jesus Christ on earth: something to be deplored. God bless you, Rubricarius, and all the wonderful work you do for the appreciation of the True and unreformed Roman Rite.

As it says on our homepage: "The Saint Lawrence Press is a private company and is not a religious organisation. It is not affiliated to any religious group or other organisation."

The Ordo is bought by a whole spectrum of Catholics, and a very wide spectrum at that including FSSP, ICK, FSPX, sede-privationists, sede-vacantists etc. In addition some Traditional Anglicans and even some Western Orthodox take it. The ethos is to raise awareness thatliturgical reform in the Roman Church has very little to do with the Second Vatican Council.

The fact that the Russian Church experienced the consequences of the tampering with received liturgy three centuries ago should surely serve as a salutary lesson to those of us in the West.