Octave Day of St. John the Apostle and Evangelist 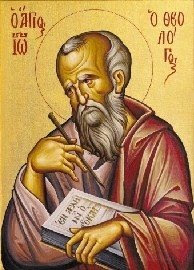 Today is the Octave Day of the feast of St. John the Apostle and Evangelist. It is of simple rite and the liturgical colour is white.

The feast began, as a simple, with first Vespers. The antiphons and psalms were ferial, the chapter proper, the hymn from the Common of Apostles and the rest proper.

At Mattins there is one nocturn of three lessons. The invitatory from the Common of Apostle but the antiphons and psalmody are from the Psalter for Saturday. The first and second lessons are from St. Paul's Epistle to the Romans, the third lesson proper to the feast. At Lauds the psalmody is ferial but the rest of the Office is as on the feast. At the Little Hours ferial psalmody is used. Hymns of Iambic metre have the Doxology in honour of the Incarnation.

Mass is on the feast with Gloria, second collect Deus, qui salutis of the BVM, third collect Ecclesiae for the Church or for the pope, the Preface is that of the Apostles.

Vespers are first Vespers of the Holy Name of Jesus without any commemorations.

In the 'liturgical books of 1962' today is the Saturday Office of the BVM. At the Little Hours the Doxology of the hymns is however not changed in honour of the Incarnation. The Mass is as that of the BVM on Saturday with Gloria and preface of the BVM. Vespers are of the Holy Name as in the Old Rite.
Posted by Rubricarius at 08:01