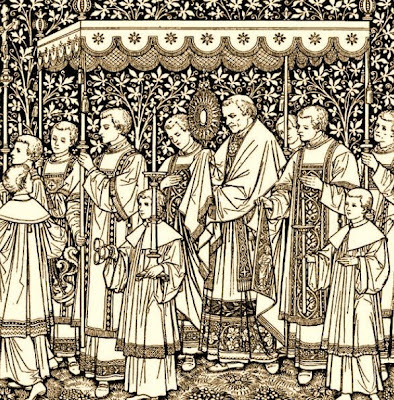 The Octave Day of Corpus Christi is of greater double rite. The Office is sung as on the feast itself except the lessons of Mattins which are proper. In the first nocturn the lessons are taking from occuring scripture, the First Book of Kings. In the second nocturn they are taken from a sermon of St. Cyril of Jerusalem and in the third nocturn the homily on the Gospel is by St. Cyril of Alexandria.

The antiphons are today doubled, as on the feast. At Lauds a commemoration is sung of St. Ephrem the Syrian and of SS Mark and Marcellian. As has been sung throughout the Octave the hymns at the Little Hours have the tone used on the Nativity. Prime is festal and has the versicle Qui natus es.

Mass is sung after Terce. The Gloria is sung, the second collect is for St. Ephrem, the third for SS Mark and Marcellian. The sequence Lauda Sion must be sung (it is optional on the other days within the Octave), the Creed is sung and the preface is that of the Nativity.

Vespers are first Vespers of the following feast of the Sacred Heart without any commemoration of the preceding Octave Day as both are considered to be the same mystery.

The Caeremoniale Episcoporum prescribed a Processon after Vespers today that was to be less solemn than that on the Feast itself (C.E. Lib II, Cap. XXXIII, 34. However this Procession was lost in the changes made by Piux X when Corpus Christi ceased to be a holy day in some countries like England and Wales until its restoration by Benedict XV.

Interestingly in Valencia, Spain, the Octave Day is still kept at the 'College of the Patriarch' - New Liturgical Movement gives a short account and videos of the praxis.

Meanwhile following the 'liturgical books of 1962' the Octave of Corpus Christi has been abolished, presumably such devotion to the Eucharist being contrary to the spirit of the times, and so a series of third class feasts and ferial days have been celebrated instead of the Octave.
Posted by Rubricarius at 09:05

It is the mind of a reprobate man, almost I would go so far as to say, an Orc, who derides devotion to the Blessed Sacrament.

In other words, the person who really got the ball rolling for the Novus Ordo is St. Pius X, without whom Pius XII would not have been able to approve of the rash changes of 1950s.

If say you had been ordained about 1900 and saying the Office for a decade or so in 1911 then certainly you would have realised the idea that liturgy doesn't change radically was not true with the overhauls of the Psalter etc.

By the 1940's and 1950's many prelates would have been men just like that who had experienced the 1911-13 changes and would probably (considering the climate of Ultramontanism) have taken the view the pope can do what he likes with the liturgy.

I am keen to find an Ordo for the EF Office, pre 1962, but don't have enough Latin to cope with the Ordo produced by St. Lawrence's press

(if it was written out in full, I might have a stab at it, but there are so many abbreviations and variations on abbreviations that I can't make head nor tail of it... my PP has a copy in the sacristy, and he finds it tricky despite being fluent, so I have no chance!!)

You raise a very good point. A former LMS MC once said the problem with an Ordo is that it is fine if one can read it but today many people cannot.

I will write a couple of posts on 'How to read the Ordo' and ask for your (and anyone else who might care to comment) feedback to see if it is helpful.