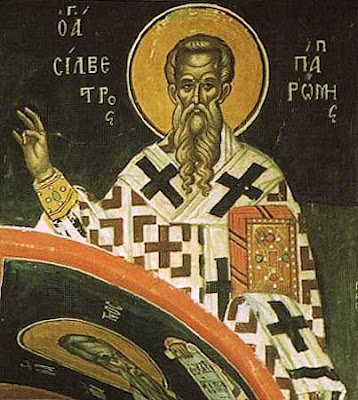 Today is the feast of St. Sylvester I Pope and Confessor. The feast is of double rite. Anciently the feast had a Stational Mass in Rome as explained in a fascinating article by Gregory DiPippo.

At Mattins in the first nocturn the Epistle to the Romans continues to be read. The second nocturn lessons are historical and in the third nocturn the homily is Sint lumbi from the Common of Confessor non-Pontiffs with the responsories of Confessor-Pontiffs. At Lauds the antiphons and psalms are taken from the Psalter for Thursdays. At Lauds a commemoration of the Octave of the Nativity is sung.

At the Little Hours the hymns have the Doxolgy and melody in honour of the Incarnation.

At Mass, Sacerdotes tui, the Gloria is sung, a commemoration of the Octave of the Nativity made, the Credo is sung and the preface and communicantes in the Canon are of the Nativity.

In the 'liturgical books of 1962' today is a day within the Octave of the Nativity. At Mattins the antiphons and psalmody are festal but there is only one nocturn of three lessons. At Lauds a commemoration of St. Sylvester is made. At the Little Hours ferial antiphons and psalms are used, the hymns do not have the tone or Doxology in honour of the Incarnation. The Mass is Puer natus with a commemoration of St. Sylvester. Vespers are the same as the Old Rite.

In pre-1911 practice in addition to the Octave of the Nativity the Octaves of St. Thomas (in England), St. Stephen, St. John the Evangelist and the Holy Innocents would have beem commemorated at Lauds and Mass.

The icon is from the All Merciful Saviour Mission's selection of icons of Western Saints.
Posted by Rubricarius at 08:31

I wonder was this day ever described in England as Sylvestermas as it is in other countries ? I have had the privilege of listening to my old BBC LP record of Pontifical Mass from the Sistine Chapel in 1613, with glorious music and much of the Ordinary and proper,but only has the comm.of the Christmas Octave after the proper prayers of the day .It was a record made in,I think, 1986 from the Radio 3 series Octave of the Nativity,which featured a sung Mass from a different time and place each day. A good 2010 to all. Alan Robinson

I would suspect it was.

I too remember 'The Octave of the Nativity' series (and have the book). Every year I scan the pages of 'Radio Times' hoping that it will be repeated - it was once - but alas.

A shame Professor Sandon got the commemorations wrong though, that was of course before his work on the Sarum Missal for Antico Edition.