The Circumcision and Octave Day of the Nativity 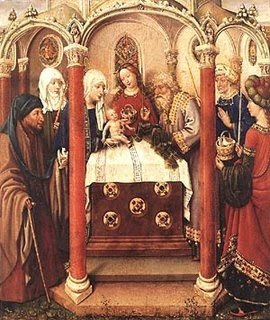 Today is the feast of the Circumcision of the LORD and Octave Day of the Nativity. It is a Double of the Second Class.

Anciently two if not three Masses were celebrated this day in Rome. There was the Octave Day of the Nativity, a Mass in St. Mary Major in honour of Mary, Mother of God (c.f. today's orations in the Missal), and the Circumcision. Although the latter probably fused with the Octave Day at an early age. The eleventh century Missal of Robert of Jumieges (now recently re-published by the Henry Bradshaw Society) gives two sets of formularies: the first for the Octave Day all specifically referencing both the Circumcision and the Octave Day and, then, for the first Sunday after the Nativity are the set of orations as found in Pius V's Missal for today but with a proper preface.

At yesterday's first Vespers the antiphons were proper and the psalms those for a feast of the BVM. At Mattins the first nocturn lessons continue to be read from the Epistle to the Romans. Prior to the 1911-13 reform today chapter 3 and 4 of that letter formed the first nocturn lessons with the first verse 'What advantage then hath the Jew, or what is the profit of circumcision? and all of St. Paul's discourse on circumcison and the Gentiles. In the reform the readings from Romans started a day earlier, on the feast of St. Thomas Becket, with the result that the first part of chapter three is omitted and no longer formed the 'appropriated' first lesson for today. In the second nocturn the lessons are taken from St. Leo's seventh sermon on the Nativity of the LORD. In the third nocturn the homily is from the writings of St. Ambrose on St. Luke's Gospel. At Lauds the same antiphons as at Vespers are sung, the hymn is of the Nativity.

At the Hours, as usual, the antiphons from Lauds are used. The Doxology in honour of the Incarnation is sung at all hymns of Iambic metre. The chapters at the Hours of Sext and None are the same as those sung on the Nativity as is the short lesson of Prime.

Second Vespers have the same antiphons and psalms of the BVM.

In 'the liturgical books of 1962' textually there are only a few differences in the liturgy today. The Circumcision has been renamed Octave Day of the Nativity and raised to first class rank. At the Little Hours the tone of the hymns will be different as the Doxology in honour of the Incarnation is omitted.
Posted by Rubricarius at 08:28

I had wondered if there were significant changes between the Old Rite and the '62 Rite for this feast. I cannot quite understand why the name of the Feast was changed though - for by implication the very date of the 1st January indicates that Christ was circumcised on this day, according to the Jewish tradition. A highly significant feast too, since it was the day on which He was given the name Jesus. Why are the Prayers of Our Lady though...unless I am so dull as to have missed something?

Because there was at one time, at least in Rome, a celebration of the Mother of God too on this day. Something the reformers probably get a half-mark for?