Candlemass - The Purification of the Blessed Virgin Mary 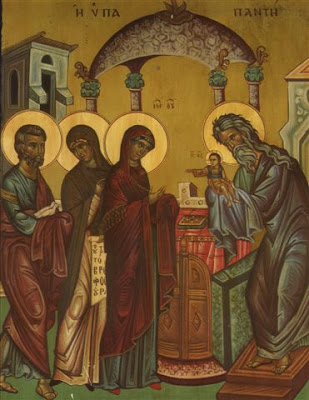 The Feast of the Purification of the BVM is a double of the second class. The feast is known in English-speaking countries generally as Candlemass as before Mass candles for use throughout the year ahead are solemnly blessed. When the feast falls on Septuagesima or one of other 'Gesima' Sundays the blessing of candles takes place on the Sunday but the feast is transferred to the following Monday. The liturgical colour of the day is white but violet is used for the blessing of candles and procession. The use of violet seems based on an ancient Roman procession on this day older than the celebration of the feast an linked to the other solemn blessings and processions that are penitential in nature. In the Byzantine East the feast is known as the Hypapante, the Meeting of the Lord, and was often so name in early Western liturgical books (e.g. several examples can be found in the comparison of Calendars given in 'Saints in English Calendars before 1100', Henry Bradshaw Society, Vol.CXVII). In the diverse Medieval uses an even more elaborate blessing than the form outlined below can be found with a preface of blessing e.g. Sarum, which compares with the blessing of Palms and Waters. Those interested in the celebration of Candlemass in the Sarum rite (which did not use violet for the blessing) should consult Fr. Séan Finnegan's Valle Adurni blog that has a series of videos of a modern reconstruction of a Sarum liturgy. Two very interesting posts, one from an Anglo-Catholic blogger and the other from an Orthodox blogger, explore respectively the 'language' of the liturgy and East-West similarities with the Hypapante may be read here and here.

Candlemass Day was the traditional day for taking down the Christmas decorations in England and other northern lands. It appears that the greenery used for Christmas was exchanged for other evergreen branches, notably box. A poem by the seventeenth century Robert Herrick runs:

Down with rosemary and bays,
Down with the mistletoe;
Instead of holly, now upraise
The greener box, for show.
The holly hitherto did sway,
Let box now domineer
Until the dancing Easter Day
Or Easter's eve appear.

At Vespers yesterday the antiphons used on the feast of the Circumcision were heard again, O admirabile commercium etc with the psalms of feasts for the Blessed Virgin (Pss. 109, 112, 121, 126 & 147). The chapter is proper to the feast and the Office hymn Ave, maris stella. The antiphon on the Magnificat is proper to the feast Senex Puerum portabat etc. A commemoration of the preceding feast of St. Ignatius of Antioch was sung. At Compline the tone of Te lucis was that for feast of the Virgin with the Doxology in honour of the Incarnation Jesu, tibi sit gloria etc.

At Mattins the invitatory is proper, Ecce venit as templum sanctum suum Dominator Dominus: Gaude et laetare, Sion occurrens Deo tuo. The antiphons and psalms for each nocturn come from the Common of feast of the Blessed Virgin as does the Office hymn Quem terra, pontus, sidera. In the first nocturn the lessons are from the Book of Exodus and from Leviticus. The responsories are proper to feast and particularly beautiful. In the second nocturn the lessons come from a sermon of St. Augustine and in the third nocturn the homily if from St. Ambrose. At Lauds the antiphons are proper to the feast and sung with the Sunday psalms. The antiphon on the Benedictus is again proper to the feast, Cum inducerent etc.

At the Hours the hymns have the melody of the BVM and the Doxology Jesu tibi sit gloria etc. The antiphons from Lauds are sung with the feastal psalms. At Prime the psalms are 53, 118i & 118ii, in the short responsory the versicle Qui natus es de Virgine is sung and the lesson is of the feast, Et placebit.

After Terce the blessing of candles takes place. The celebrant vests in a violet cope and the ministers in violet folded chausubles. The altar is vested in violet and the organ is silent (as is always the case when folded chausubles are used.) At the Epistle corner the celebrant sings five prayers of blessing in the ferial tone. Incense is then blessed, lustral water sprinkled over the candles whilst the celebrant says Asperges me and then the candle are censed. Candles are then distributed while the antiphon Lumen ad revelationem is sung interpolated into the canticle Nunc dimittis. At the conclusion of this the antiphon Exsurge, Domine is sung with a Doxology. After the distribution the celebrant returns with the ministers to the Epistle corner and chants Oremus. As the feast falls after Septuagesima the deacon sings Flectamus genua and the sub-deacon Levate. The celebrant then sings the collect Exaudi. The procession then takes place with lighted candles during the singing of three antiphons Adorna thalamum, Responsum accepit Simeon and Obtulerunt. These text are clearly ancient and found, almost verbatim, in the Menaion of the Byzantine rite.

After the Procession the ministers change from violet vestments to white and Mass is celebrated. The Gloria and Credo are sung and the preface is that of the Nativity, the feast being a 'satellite' of Christmas. Lighted candles are held by all during the chanting of the Gospel and from the beginning of the Canon until after the distribution of Communion.

At second Vespers the antiphons and chapter from Lauds are used again with the psalms of the Blessed Virgin, the antiphon on the Magnificat is proper. From Compline the Marian antiphon changes from Alma, Redemptoris to Ave, Regina caelorum etc.

In the 'extraordinary form' of the modern Roman liturgy the feast loses first Vespers (unless it falls on a Sunday or is celebrated as I class). Mattins and Lauds is the same as the Old Rite. At the Little Hours the ferial antiphons and psalter are used and although the versicle Qui natus is sung the short lesson at Prime is of the season, rather than of the feast, and the Doxology in honour of the BVM is omitted at all the hymns of the Little Hours which are sung to a differnt tone. At the blessing of candles white vestments are used (if anyone has a reference to an explantion of the colour change by the reformers please let me know). The five collects of blessing have the usual 'long conclusion' omitted, the verse Exsurge, Domine is omitted, the command of Flectamus genua is always omitted even in Septuagesima and at Mass Judica me Deus etc is excised as on several other days in the 1962 missal.

Art: Icon of the Hypapante from St. John's Parish of the Melkite Eparchy in Australia.
Posted by Rubricarius at 08:01

A rubric in the Breviary (in the Ordinarium of the Office) deals precisely with your question.


So when Candlemass fall on Septuagesima etc the antiphon Ave Regina is still sung from Compline of the 2nd February even if the feast is transferred to the following day.

"When the feast falls on Septuagesima or one of other 'Gesima' Sundays the blessing of candles takes place on the Sunday but the feast is transferred to the following Monday."

If that were to happen would violet dalmatics be used for the blessing (as they are used at the -gesima Masses), or would the ministers use violate chasubles for the procession and then change into violet dalmatics for the Mass?

Violet folded chasubles are worn for the blessing of candles and procession.

If the Mass is of a 'gesima' Sunday then the deacon and subdeacon don dalmatic and tunicle when the celebrant exchanges his cope for a chasuble.

Thank you for that explanation. That sounds like a rare liturgical treat to which few people will ever be privileged.

When I said "violate chasubles" naturally I mean "violet" - I was not trying to suggest that folded chasubles were somehow violated or mutilated!

Indeed, something I have not seen - yet!

I suppose folded chasubles were violated. Few things can be more ancient or more Roman than their use yet that didn't stop their use being attacked. A friend of mine has a set in his sacristy that have had brocade etc cut off them and I know of a certain church in London where about twenty sets are rotting quietly away on the floor of a store-room.

"AI know of a certain church in London where about twenty sets are rotting quietly away on the floor of a store-room."

If only those little treasures could be sent to Manila...