Rubrics for the Liturgy in Lent 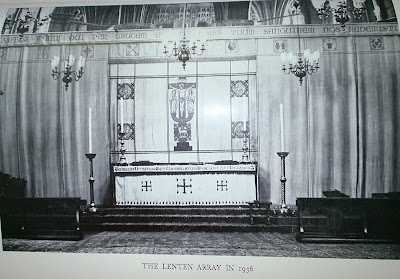 For all the Sundays of Lent, except the fourth Sunday, Laetare, and on weekdays, when the Office is of the season, the altar is without flowers or other decoration. The organ is not played and the deacon and subdeacon (and assistant deacons etc at Pontifical functions) wear folded chasubles.

For all of Lent and Passiontide Votive Masses are not allowed. Private Masses for the dead are allowed on the first 'free' day of each week except Holy Week.

In all ferial Masses of the season the instruction Humilitate capita is given followed by the Oratio super populum. This prayer is also used as the collect for Vespers from Monday to Friday inclusive, or for the commemoration of Vespers in a festal Office.

The preface of Lent is used in all ferial Masses, on Sundays and on feasts that do not have a proper preface, until the Saturday before Passion Sunday inclusive.

For all of Lent, in the ferial Office, the antiphon at the Benedictus and Magnificat and the respective collects are proper to each day; the ferial preces are said, kneeling, at each Hour; at Prime a fourth psalm (displaced from Lauds) is added as noted in the Psalter.

No Octave, in the Universal or Particular Calendar is kept from Ash Wednesday to Low Sunday inclusive with the exception of the great Octave of Easter.

The solemn celebration of Marriage is forbidden until Easter Monday.

(Freely translated from the Ordo)