Ember Wednesday - The Seven Dolours of the BVM 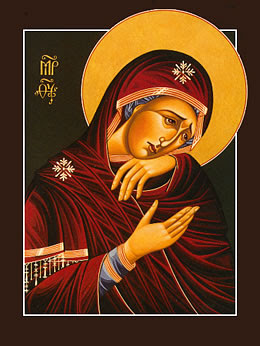 Today is the Ember Wednesday in September or, sometimes, referred to as the Michaelmas Ember Wednesday. This year it is also the feast of The Seven Dolours, or Seven Sorrows, of the BVM which is a Double of the Second Class. The Ember Days are ancient liturgical celebrations and, traditionally, times of fasting and penance. Of the two feasts of The Seven Dolours, one on the Friday before Palm Sunday and this one, the Lenten celebration is significantly the older. The September celebration entered the Kalendar in the seventeenth century on third Sunday of September. The feast became a Double of the Second Class in 1908 and was moved in the 1911-13 reform to the Octave Day of the Nativity of the Blessed Virgin.

At Mattins the invitatory is Stemus juxta Crucem etc and hymn O quot undis lacrimarum. The antiphons at the nocturns are proper. In the first nocturn the lessons are from the Prophet Jeremiah. In the second nocturn the lessons are from a sermon on the twelve stars by St. Bernard. In the third nocturn the homily is from St. Ambrose. The ninth lesson is of the September Ember Wednesday. Its three lessons may be read as one, the better practice, or just the first lesson read. The Te Deum follows. At Lauds the antiphons sung at Vespers yesterday are sung with the Dominical psalms. The hymn is Summae Deus clementiae. After the collect of the day commemoration are sung of the Ember Wedneday and the martyr St. Nicomedes.

At Prime and the Hours the hymns are sung to the melody of the proper Doxology and the antiphons of Lauds are sung with the Dominical psalms. At Prime the festal psalms are sung (Pss.53, 118i & 118ii), in the short responsory the verse Qui passus es propter nostram salutem is sung and the lectio brevis is proper, Deduc quasi.

Vespers are Second Vespers of the feast. After the collect of the Day a commemoration is sung of the following feast of SS Cornelius & Cyprian. At Compline the Sunday psalms are sung and the feast's Doxlogy sung for the final time.

In the 'liturgical books of 1962' Ember Wednesday is postponed a week due to the novel way introduced of calculating the first Sunday of the month. An interesting article about this change has been written by the esteemed Gregory DiPippo on the New Liturgical Movement site. The feast of the Seven Dolours loses first Vespers. There is, obviously, no ninth lesson of the Ember Day nor of St. Nicomedes (as is sung when September 15th is not an Ember Day). At the Hours the ferial antiphons and psalter are used. At Mass the last Gospel is In principio. There is no proper Doxology or melody at the Hours, at Prime the lectio brevis is ferial. Vespers are without any commemorations.
Posted by Rubricarius at 09:01