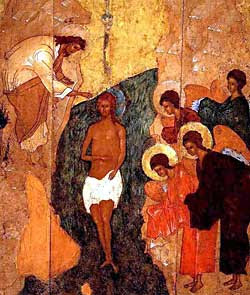 The feast of the Epiphany is a Double of the First Class with a privileged Octave of the Second Order. The Epiphany was kept in the East from the third century, or earlier, and spread to the West a century later. Originally, it seems, in the East at least that this 'manifestation' of the LORD was the same celebration as the Nativity. To this day those following the Armenian Rite keep Theophany (the Nativity & Epiphany as one feast) today - a happy Christmas to any Armenian readers!

The antiquity of the feast can be clearly seen in the structure of the Office of Mattins, unique to this day. The (historically later) Domine labia me, invitatory and hymn are ommitted and the Office begins with the first antiphon Afferte Domino. In the first nocturn the lessons are from Isaiah. In the second nocturn the lessons are from a sermon on the Epiphany by St. Leo. In the third nocturn the usual invitatory psalm, Venite , is sung in the third nocturn, in a responsorial manner, with the verse Venite, adoremus eum: quia ipse est Dominus, Deus noster. A homily of St. Gregory is read in the lessons of the third nocturn. At Lauds the antiphons sung at Vespers yesterday, Ante luciferum genitus etc., are sung with the Dominical psalms.

In the 'liturgical books of 1962' the only textual changes today are the abolition of the Doxology in honour of the Epiphany at the hymns of the Little Hours and the duplication of antiphons at the same. Tomorrow however...
Posted by Rubricarius at 08:30

I noticed this morning that the version of Ps 94 used in the third nocturn was slightly different from the one I am accustomed to recite at the Invitatory. This may be the Breviary I was using (Burns & Oates 1948), but if not, do you know any reason for it?

The text of Ps. 94 used in the third nocturn for the feast of the Epiphany is the sole remnant of the Old Roman Psalter of St. Jerome, all the other psalms are from St. Jerome's 'Gallican' revision of the Psalter.

Dear Anonymous,
If I may: the text of Psalm 94 that occurs in the third nocturn is St. Jerome's revision of the Vetus Itala translation (made from the LXX, I believe). The text of Ps. 94 regularly used for the Invitatory is the Vetus Itala, the only instance of the old Latin translation retained in the Office, if I am not mistaken.

I managed to get it the wrong way round, mea culpa!

I submit a third variant:

The psalms used in the Roman Breviary are generally from St. Jerome's Psalterium Gallicanum.

Ps. 94 normally used in the invitatory is from St. Jerome's Psalterium Romanum.

And Ps. 94 as sung today at Matins is from the Vetus Latina.