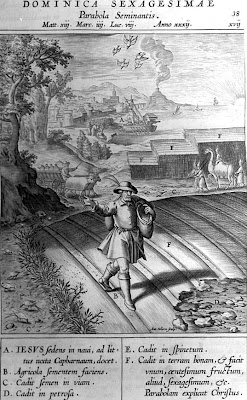 Sexagesima Sunday is a semi-double of the second class. The Sunday is characterised by a very lengthy Epistle, from St. Paul's Latter Epistle to the Corinthians. The Gospel pericopes are from St. Luke and the parable of the sower with his seed landing on rock, amongst weeds and on the good ground.

At Lauds the 'second scheme' of psalms is sung: Pss 50, 117, 62, Canticle of the Three Children (Benedictus es) and 148. The antiphons at Lauds are proper for Sexagesima Sunday as are the antiphon at the Benedictus and collect. After the collect of the Sunday a commemoration is sung of the Seven Founders of the Servite Order.

At Prime the order of psalmody is Pss. 92, 99 (displaced at Lauds) and the usual first two divisi of Ps. 118. The Dominical preces are omitted due to the occurring double feast. At the Hours the antiphons and chapters are proper to Sexagesima Sunday.

Mass is sung after Terce. The Gloria is omitted, the second collect is of the Seven Founders of the Servite Order. There is no third collect. A Tract is sung after the Gradual, the Creed is sung , the Preface is of Trinity and Benedicamus Domino is sung as the dismissal by the deacon facing the altar.

At Vespers the antiphons and psalms are those of Sundays, the chapter is proper as is the antiphon on the Magnificat. After the collect of the Sunday a commemoration is sung of the Seven Founders of the Servite Order. At Compline the Domincal preces are omitted because of the double feasts commemorated at Vespers.