Before continuing this exploration of the changes to the layout of editions of the 1962MR a glaringly obvious omission in post 1.2 of this series was failing to comment on the large capital letters before the first Sunday of Advent. The 1962MR saw the inclusion of Tempus Adventus as can be seen in the photograph. Within the temporal cycle parts of the Liturgical Year were delineated as Tempus Adventus, Tempus Nativitatis, Tempus Epiphaniae, Tempus per Annum ante Septuagesima, Tempus Septuagesima, Tempus Quadragesimae, Tempus Passionis, Hebdomada Sancta, Tempus Paschatis, Tempus Acensionis and Tempus per Annum post Pentecosten. 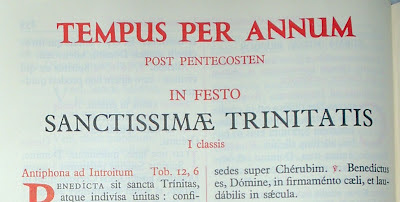 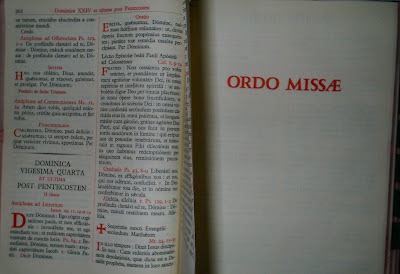 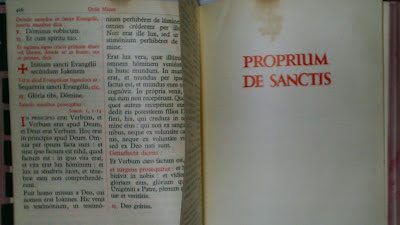 As readers will be aware the Ordo Missae and Canon pages in printed Roman missals had been placed between the end of Holy Saturday and the beginning of Holy Pascha. Interestingly, the 1970 has its Order of Mass (with a congregation) and Anaphorae between the Temporal and Sanctoral sections of the book. A further interesting change is to be found in the page headers of this section. In pre-1962 editions of the Roman missal Canon Missae appeared as the header not only on those pages containing the text of the Canon itself but also on the pages containing the Pater noster, Agnus Dei, embolism etc all the way through the rite to the last Gospel. This may be observed in the photograph of the 1952 Marietti edition below: In contrast the 1962MR limits Canon Missae as a header strictly to those pages containing the text of the Canon. Pages with the Pater noster, Agnus Dei etc have the header Ordo Missae. This is clearly seen in the photograph below: the header changes from the page ending with the Doxology of the Canon to the invitation to the Pater noster on the facing page. This differentiation between the pages of the anaphorae and the order of Mass was maintained in MR1970. 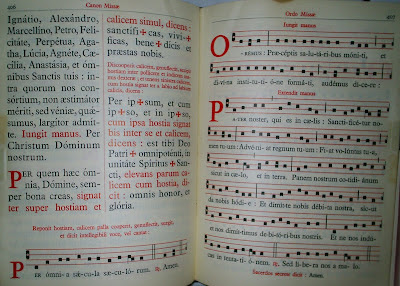 The last part of this section, 1.5, will look at changes to the Votive and Requiem Masses. Section 2 will consider changes in the rite of Mass itself.
Posted by Rubricarius at 23:00

What do you think, please, is the significance of these changes?

I assume the allowance of these (ultimately) Neo-Gallican Prefaces is to viewed as part of that movement, in the first half of the twentieth century, that produced new Prefaces for the Dead, for the Sacred Heart, Christ the King, etc., and for the principal saints of each religious Order (for use in each). I must say, apart from being a bit wordy, they seem pleasant enough (though Corpus Christi surely is better off with the Christmas Preface - the Bl. Sacr. Preface is so longwinded as to quote the whole O sacrum convivium) and, methinks, innocent additions to the Liturgy. But what say you?

Your post solved a puzzling question I had just this last weekend. My brother and I served Pontifical Mass for a bishop who brought his own 1962 missal. Being more familiar with older missals, we couldn't find the various parts of the Mass without great difficulty -- the arrangement, in our opinion, is all messed up!