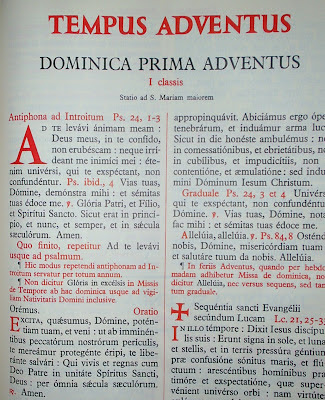 The Temporale begins, as usual, with the first Sunday of Advent. Three changes are immediately apparent before the epistle: (i) the new classification system of liturigcal days; (ii) the renaming of the Introit as Antiphona ad Introitum; and, (iii) the suppression of the rubric ordering seasonal orations. The ancient system of the classification of liturgical days into doubles, semi-doubles and simples (often seen in pre-Trent uses as varying degrees of feasts of nine lessons and those of three) is done away with following the reforms of Cum nostra and Rubricarum instructum to be replaced by four classes of liturgical day from I Class days, the highest ranking, to IV Class, the lowest.  The re-ordering of the classification system is one reason why the General Rubrics of the Missal had to be re-written.  The descriptors Introitus, Offertorium and Communio are replaced respectively with Antiphona ad Introitum, Antiphona ad Offertorium and Antiphona ad Communionem.  The first appearance of the new terminology in the Roman rite was in the 1956  'Restored' Order for Holy Week.  The same terminology is found in the 1970MR (except the antiphon at the offertory which does not appear in 1970MR but does appear in the corresponding Gradual).  The collects of the season were abolished with the 1956 changes but the rubric ordering their use remained until the printing of missals of this period (for Advent they are Deus, qui de beate and Ecclesiae (or from 1570 pro papa).  These differences can be seen in the photographs of Advent Sunday in the 1962MR (above) and a 1952 printing of the old rite (below). 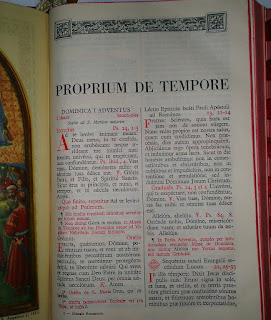 A few pages following Advent Sunday one of the innovations found in 1962MR can be seen, the 'mini-Mass' shorter form for the Ember Saturdays. The traditional form (without the collects of the season) still appears, as an option, but appellated Forma Missae Longior. The novelty is the Forma Missae Brevior with a single additional OT reading for optional use in Masses other than the Conventual Mass and Ordinations (see below). 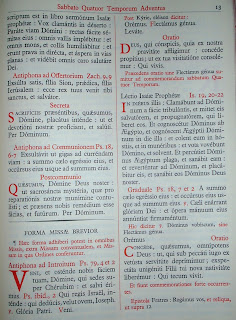 Is it really fair to call the shorter option for Ember Saturdays an "innovation?"

That's a fighting word on here, to be reserved for things like brand new Eucharistic Prayers in the 1970MR.

Simply allowing for the omission of some epistles and graduals? Eh. Similar to conventual/non-conventual distinctions to me. Certainly nothing horrible.

Can you give an example where there is a distinction in the number of epistles in a Conventual or non-Conventual Mass?

As to anaphorae we have not got there yet is this series. The call for changes to the anaphora in the Roman rite first saw concrete expression by Jungmann at the 1951 International Liturgical Congress at Maria-Laach.

An example I can think of is that the Litany is said on the minor rogation during the conventual Mass, but not at the non-conventual Masses.

Another is the omission of the blessing of the palms on Palm Sunday lesser Masses.

The point is that there was clear precedence for allowing for a stripped-down version of a longer Mass if there is to be a secondary Mass celebrated at the parish. The Ember Sat merely builds on that precedent.

I wonder what the rationale was behind adding the word "antiphon" to each proper.

Where there is a Procession the Litany is sung regardless of whether the Mass that follows is a Conventual one or otherwise. Where a Procession does not take place those in the clerical state were obliged to recite the Litany. There is no difference, apart from the number of Conventual Masses between the Greater and Lesser Litanies.

The blessing of Palms, Candles and Ashes was done before the principal Mass on those days. The actual Mass formularies were the same regardless of whether the principal Mass was sung or a private one (with the exception of faculties that were granted to omit the Passion on Palm Sunday in some private Masses).

Before the 1960-62 stage of the reform there was, contrary to your assertion, no precedent for omitting whole chunks of liturgical texts. You might, justifiably, claim that the Ember Days (apart from in Collegiate Churches) were often just commemorated on double or semidouble feasts but to chop away four pericopes etc simply has no precedent.