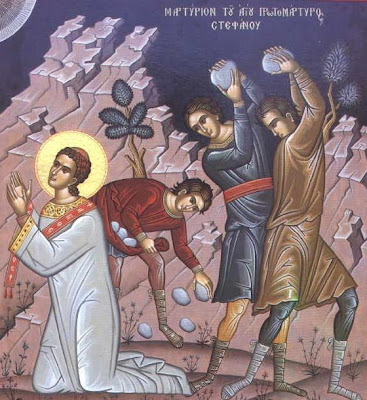 Today is the feast of St. Stephen the Protomartyr. The feast is a Double of the Second Class with a simple Octave. The liturgical colour of the day is red. Many saints, originally more than now, were celebrated around the Nativity of the LORD. These were described as the 'comites Christi' . e.g. St. James the Lesser and King David. In 'modern' calendars we are left with St. Stephen, St. John the Evangelist, and the Holy Innocents although St. David the King is in the Kalendar as a greater double on the 29th December in the Patriarchate of Jerusalem.

Yesterday St. Stephen was commemorated at Second Vespers of the Nativity, (Special rules apply to Vespers for the Octave of the Nativity) as noted in yesterday's post.

At Mattins the invitatory is proper, Christum natum, qui beatum hodie coronavit Stephanum. The Office hymn is Deus, tuorum militum sung with the Doxology of the Nativity. In the first nocturn the antiphons In lege Domini etc are sung with psalms 1, 2 & 3 all from the Common of a Martyr. The lessons are from the Acts of the Apostles with responsories proper to the feast. In the second nocturn the antiphons Filii hominum etc are sung with psalms 4, 5 & 8 and the lessons are from a sermon of St. Fulgentius on St. Stephen's martyrdom. In the third nocturn the antiphons Justus Dominus etc are sung with psalms 10, 14 & 20. The homily is from St. Jerome on St. Matthew's Gospel. The Te Deum is sung. At Lauds the proper antiphons, Lapidaverunt Stephanum etc., is sung with the Sunday psalms. The Office hymn is Invicte Martyr unicum sung with the Doxology of the Incarnation. After the collect of the feast a commemoration is sung of the Octave of the Nativity.