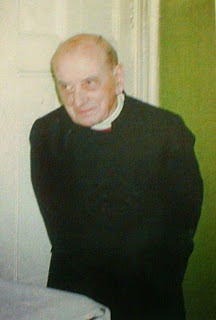 Today marks the 113th birthday of the late Mgr. Alfred Newman Canon Gilbey, Protonotary Apostolic. May he enjoy it in the Court of Heaven. He used to say he thanked the Almighty that he was not born a day earlier, the anniversary of the Battle of the Boyne, or a day later, the anniversary of the storming of the Bastille. A remarkable man and without doubt the very finest cleric and gentleman this writer has ever known.

To share one wonderful anecdote: When once Her Majesty Queen Elizabeth The Queen Mother visited the Travellers Club She met Mgr. Gilbey on the stairs. "I believe I am a year old than you" She commented. Mgr. Gilbey replied, no doubt with the famous twinkle in his eyes "Impossible Madam. There is only one Lady in the realm older than me and that is Her Majesty Queen Elizabeth The Queen Mother. Good night to you Madam."
Posted by Rubricarius at 14:01

May his memory be eternal.